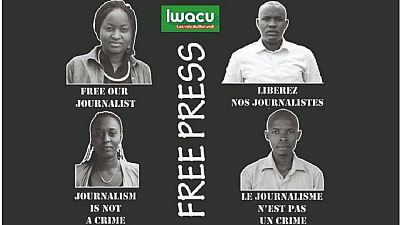 The European Union’s parliament has urged Burundi to release four journalists and who have been jailed since October.

The European parliament on Thursday called on Burundian authorities to drop charges and immediately release the reporters for Iwacu, one of the few remaining independent media organizations in the country.

The reporters, two females and two males, were arrested in Musigati district where they had traveled to report on an armed attack by anti-government rebels in the Kibira National Park, about 50 kilometers (30 miles) north of the capital, Bujumbura.

They were charged with undermining state security and the public prosecutor called for 15-year jail sentences. He also called on the judge to deny them the right to vote for five years.

The European parliament’s resolution, passed in Brussels, Belgium, said the jailing of the journalists is part of the “continued deterioration of the human rights situation in Burundi ahead of the May 2020 elections.”

The plight of the journalists “is very alarming and concerning for everybody who cares about press freedom, freedom of speech and even democracy in Burundi and in the region,” said Muthoki Mumo, of the Committee to Protect Journalists.

The jailing of the journalists comes after the Burundi government closed several local media groups. And last year Burundi stopped local operations of the Voice of America and the British Broadcasting Corporation, which aired broadcasts in the local Kirundi language.

Tensions continue to rise as Burundi’s polls approach. Local authorities and the ruling party’s notorious youth league members have beaten, threatened, and restricted people’s access to basic services to force them to “donate” money to fund the elections, and committed rampant abuses against the opposition, according to Human Rights Watch.