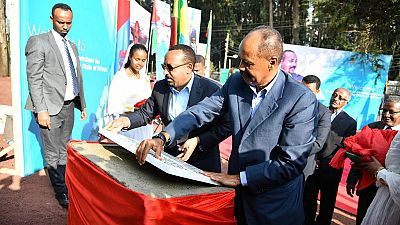 Ethiopia on Thursday donated land to Eritrea, saying it was giving the people of its neighbouring country a gift where a new embassy will be built to cement relations between the two nations.

Abiy and Eritrea’s president Isaias Afwerki laid the foundation stone for the new Eritrean Embassy to be build at Sidst Kilo in the capital Addis Ababa.

The embassy was reopened in July last year, after a peace deal ended two decades of hostilities over a border dispute.

Afwerki who is an official state visit has also toured several development projects in Ethiopia including the Adama Industrial Park, Holand Diary, the Sheger beautification project and the Entoto observatory and research center.

Earlier in the day and accompanied by PM Abiy Ahmed, President Isaias and his delegation paid a visit to Adama city (Oromia Region), the Industrial Park there as well as agricultural and industrial projects in Bishoftu and Dukem pic.twitter.com/aLEUU5Y371