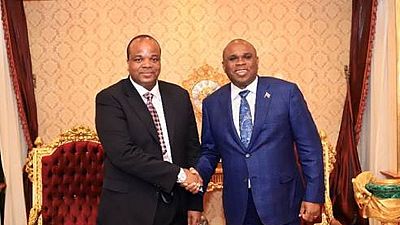 The African Export-Import Bank (Afreximbank) will provide a credit facility valued at up to two billion Rands (about $140 million) to the Kingdom of Eswatini to enable the Kingdom achieve required funding to meet trade and strategic economic goals, Bank President Prof. Benedict Oramah, announced in Mbabane.

Oramah, who was addressing King Mswati III of the Kingdom of Eswatini on May 31 when he led an Afreximbank delegation to visit the King during a two-day state visit to the Kingdom, briefed him on a joint declaration which Afreximbank signed earlier in the day with officials of the Kingdom.

He said that the facility would also enable the Kingdom to leverage its future financial flows as a tool for economic development.

We want to be relevant to the country. This visit will help us chart a more aggressive course.

King Mswati III commended Afreximbank for the assistance and services it was committing to the country and welcomed the signing of the joint declaration as a key contribution toward the development of the Kingdom.
Earlier, during the signing ceremony, Neal Rijkenberg,
Minister of Finance of Eswatini, who signed the Joint Declaration on behalf of the government, said that the facility, when finally effective would help to address developmental opportunities before the kingdom.

Rijkenberg said that Eswatini could use Afreximbank’s assistance for advisory services in converting Eswatini’s agro-processing potential into a leading export driver. He also invited the bank to explore opportunities in the tourism and manufacturing sectors.

The delegation also met with Prime Minister Ambrose Mandvulo Dlamini who commended the Bank’s commitment and dedication to Eswatini since it became a member of the Bank and said that the Bank’s support was invaluable to the Kingdom’s economic growth and expansion.

Oramah affirmed Afreximbank’s commitment to supporting the economic growth of Eswatini, saying, “We want to be relevant to the country. This visit will help us chart a more aggressive course to support the development of the country. There are many areas in which we can assist.”

Oramah also identified the timber industry as a sector where Afreximbank could provide support. He noted that Eswatini had a large supply of timber and recommended that the government should develop a policy for the processing.

The Afreximbank delegation also participated in the launch of the End Malaria Fund hosted by King Mswati III. The initiative seeks to end malaria in Eswatini and Africa by 2020.