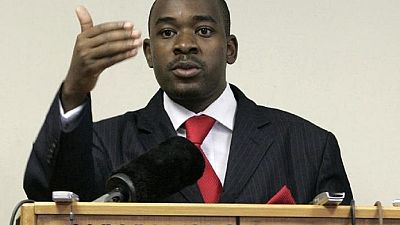 Zimbabwe’s opposition leader Nelson Chamisa on Wednesday called upon president Emmerson Mnangagwa to ‘urgent dialogue’, saying its time to solve ‘our politics and economics’ before it gets worse.

Chamisa, who tweeted his call for dialogue, said Zimbabweans are suffering from the high prices, non-performing economy and salary crisis, set off by worsening foreign currency shortages.

‘‘I’ve met with many on our worsening situation and unbearable suffering,’‘ read part of Chamisa’s tweet.

I’ve met with many on our worsening situation and unbearable suffering.The back-to-school burden,high prices,non-performing economy, joblessness and worthless salaries bring sorrow.On this,I call upon my bro ED to urgent dialogue to solve our politics &economics or it gets worse!

Chamisa, who lost a presidential election to Mnangagwa last year, has insisted that the ruling ZANU-PF government has no legitimacy and is therefore incapable of solving the country’s problems.

Meanwhile, Zimbabwe’s main civil service union said on Wednesday its members will join a growing strike if the government does not agree to pay them in U.S. dollars.

The Apex Council, which represents 16 public sector unions, said it gave the government the required two-week notice of industrial action on Tuesday.

“If they do not pay us in U.S. dollars or an equivalent, we are going on a fully fledged strike,” Apex deputy chairman Thomas Muzondo said.

Doctors and some teachers have already staged walk-outs, saying they need the hard cash payments to protect them against inflation and a currency crunch.

With not enough hard currency to back up funds showing in bank accounts, the value of electronic money has plummeted, prompting businesses and civil servants to demand payment in U.S. dollars they can withdraw.

Vincent Hungwe, the chairman of the Public Service Commission that employs civil servants, said the government planned to meet unions and make an offer by Thursday. Late on Tuesday, he said the state would expand cost-of-living payments and propose a new pension scheme.

Any move to compensate workers by increasing wages would scupper government plans to cut the fiscal deficit by more than half to 5 percent of GDP this year and bring down the wage bill to 70 percent of the budget from more than 90 percent previously.

Reducing that wage bill is one of the main demands of the International Monetary Fund, which has urged the government to channel more money to infrastructure development and health.

The government employs more than 300,000 workers and spends $300 million on salaries every month.