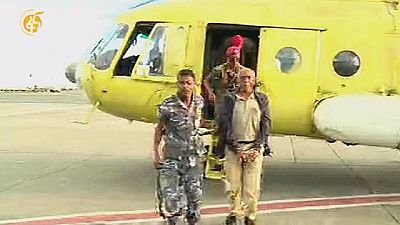 Ethiopia’s northern Tigray regional state deserves praise for the role they played in the arrest of a former army chief currently in Addis Ababa to face corruption charges. This is the view of an Ethiopian activist, Jawar Mohammed.

Reports indicate that he was arrested in Tigray region’s town of Humera as he tried to cross into neighbouring Sudan.

By refusing to shield those criminals, Tigray regional state and people did historic decision today. They have reassured the rest of the country that they remain committed to the federal system.

Jawar reported that Dagnew was arrested by regional police and subsequently handed over to federal authorities who flew him to the capital. Other Twitter users also shared the same view on the development.

“By refusing to shield those criminals, Tigray regional state and people did historic decision today. They have reassured the rest of the country that they remain committed to the federal system. Thank you!!” Jawar tweeted on Tuesday.

This is great news. Gen Kinfe Dagnew was apprehended by Tigrai police and handed over to feds. Kudos to Prez Debretsion! https://t.co/mTu54HmOPR

Over 60 persons have been arrested by authorities in Addis Ababa over allegations of corruption and gross rights abuses. MetEC officials are being held for corruption whiles the human rights charges are against ex-officials of the Information Network Security Agency, INSA.

The region is routinely reported as been the worse-hit in the light of sweeping reforms by Prime Minister Abiy Ahmed Ali.

Reports indicate that Tigrayans had for decades been put in charge of the country’s most sensitive positions in the security and economic sectors. The region has a party in the four bloc ruling Ethiopian Peoples Revolutionary Democratic Front, EPDRF.

One of the most spoken about Tigray official is Getachew Assefa,
a former intelligence chief believed to be complicit in gross human rights abuses. He is currently the subject of a request for sanctions by the United States Congress.