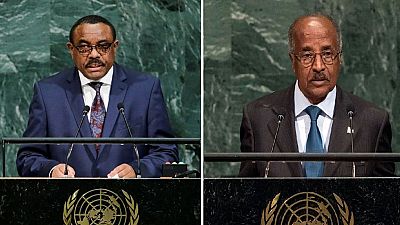 The Eritrean government is accusing its neighbours, Ethiopia, of threatening the peace of the Horn of Africa region with its continued occupation of their sovereign territory.

Eritrea’s position was contained in Asmara’s address to the United Nations General Assembly during the 72nd session of the meeting of heads of state and government.

The country’s Foreign Affairs chief, Osman Saleh Mohammed, noted that Ethiopia’s decade-and-half occupation had become more of a regional security issue than one that affected them only.

Another impediment in front of Eritrea, indeed in front of the whole Horn of Africa region is the 15-year-old occupation of sovereign Eritrean territory by Ethiopia.

After making a strong call for the U.N. to lift U.S.-led arms sanctions imposed in 2009, he added: “Another impediment in front of Eritrea, indeed in front of the whole Horn of Africa region is the 15-year-old occupation of sovereign Eritrean territory by Ethiopia.

“Eritrea calls on the Security Council to ensure the end of this flagrant violation of international law and several UN resolutions,” he stressed.

The Horn of Africa region is basically a peninsula of northeastern Africa (the easternmost part of Africa) comprising Somalia and Djibouti and Eritrea and parts of Ethiopia. It is dogged with terrorism, piracy and recently an acute drought and famine in parts.

Incidentally, Ethiopia happens to chair the Security Council’s activities for the month of September. The country was voted to take a non-permanent seat in 2016 but resumed its tenure on January 1, 2017.

Tensions between the two countries remain high with escalations reported in the past. Addis Ababa insists that its former ‘colony’ is planned behind attacks on it. They argue that Eritrea was backing anti-peace elements stoking protests against the regime. Asmara denies this.

Both countries continue to trade diplomatic blows over a border demarcation issue stretching back decades. The then Ethiopian Prime Minister, Meles Zenawi and Eritrean President Isaias Afwerki signed a border demarcation agreement in Algiers but the terms has yet to be fully implemented.

Eritrea’s other neighbours are Djibouti and Sudan. The country is located at a strategic area along one of the world’s busiest shipping routes. The country retained the entire coastline of the then – Ethiopia after the attainment of independence in 1993.