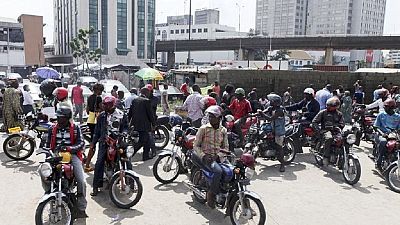 A popular transport culture in Nigeria suffered a setback in Africa’s most populous nation with a court ruling that the activities of commercial motorcycle operators must be restricted to certain areas of Lagos, the commercial capital.

The Court of Appeal affirmed a decision by a lower court to restrict the activities of commercial motorcycle operators popularly referred to as Okada riders. These riders are seen by many city dwellers as a more faster and reliable means around Lagos.

The court by its ruling upheld the constitutionality of Section 3 of the Lagos State Road Traffic Law 2012 which restricts ‘okada’ operators from plying some routes within the State, which is aiming to reach mega city status by 2020..

A group of appellants under the banner of The Incorporated Trustees of All Nigerians Autobike Commercial Owners and Workers Association (ANACOWA) and other persons through a summons, had approached the Court contesting that the Road Traffic Law violated their right to freedom of movement and sought an order of the Court to declare the said Section as unconstitutional.

Africa’s most populous capital is home to over 20 million inhabitants and to several businesses, as a result the city experiences lots of gridlock which makes getting around the city even more challenging.

In its ruling, it held that that Section 3 of the Law was within the legal remit of the state government who via the Lagos State House of Assembly enact laws for the State.

The Court further ruled that the law was enacted with the overriding intention to protect the interest of the public, provide environmental sanity and reasonably justifiable for a society like Lagos State.

…of the Lagos State Road Traffic Law 2012 which restricts commercial motorcycles popularly known as Okada from plying some routes.

‘Okada’ was name for a now defunct airline which became notorius for its discomfort despite being widely popular among locals. The motorcycles were named after the airline because of their ability to meander through trafic. They were also handy especially in reachin places where commercial transport refused to go due to very bad access routes.

Okadas quickly became popular and were generally accepted by the Nigerian society. Till date, they remain one of the primary modes of transportation in Nigeria, and comprise a cheap and adaptable transportation system, the most popular informal one in the country.

Even in remote villages, they arrive at regular intervals. It has become a means of transportation regularly used by the young and the old, and men and women. However it was largely held that they were also convenient for use by armed robbers and other miscreants.

That reason coupled with rising incidences of risky driving and related accidents, led to heavy criticism of okadas resulting in legislation intended to restrict or prohibit their operation in some Nigerian cities, notably Lagos in 2012.