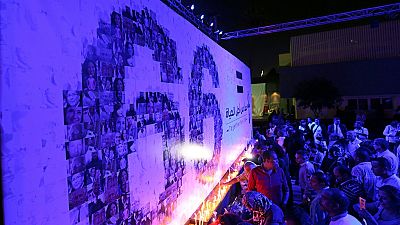 Hundreds of people gathered in Egypt’s capital Cairo, to pay tribute to the victims of last week’s plane crash.

Armed with flowers, lit candles, Egyptian flags as well as EgyptAir banners, they matched to the Cairo Opera House to honour the memories of all the 66 aboard the ill-fated airbus.

“The entire Egypt is sad about what happened. Not only to the Egyptian victims but also for all the others who perished in the crash. We don’t know what happened. I am here with them,” said Jihan Halawa, who attended the occasion.

The entire Egypt is sad about what happened. Not only to the Egyptian victims but also for all the others who perished in the crash. We don't know what happened. I am here with them.

Our thoughts today are with #EgyptAir victims and families. Our #LambOfTheDay is is tribute to them. pic.twitter.com/iRyP5suc3a

Led by the French Ambassador in Egypt, they placed the lit candles at the memorial site containing pictures of some of the victims.

“On this occasion, I want to express on behalf of French authorities our condolences to all those who lost their beloved in this crash, and also I want to express special sympathy to EgyptAir and all the members of EgyptAir staff,” said Andre Parant, French Ambassador in Egypt.

Search operations are ongoing for the black boxes of the EgyptAir Flight MS804, that could determine the exact cause of the crash.

So far, some debris from the plane – including life vests, personal belongings and parts of wreckage – have been recovered.

Small fragments of human remains have also been found, and Egyptian officials are trying to identify and match them to passengers or crew members.