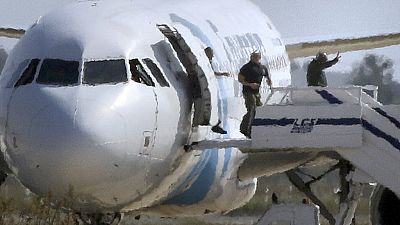 The man alleged to have hijacked the EgyptAir Airbus 320 was wearing a fake explosive belt, according to an official statement by the airline.

The alleged hijacker identified as an Egyptian man diverted the flight travelling from Alexandria to Cairo, forcing it to land in Cyprus.

According to the airline’s report, the man is said to have threatened the pilot with a suicide belt forcing him to divert to Larnaca airport.

Soon after, the alleged hijacker released majority of the passengers, leaving all but four foreigners and seven crew members on board.

Nevertheless, after intense hours long of the ordeal, the hijacker of the domestic flight was arrested. He emerged from the aircraft with his hands held up.

Cyprus ministry of foreign affairs confirmed the ordeal was over in a tweet.

Its over. The #hijacker arrested. #LarnacaAirport # Egyptair

Egypt’s Civil Aviation Ministry said that 81 people, including 21 foreigners and 15 crew, had been on board the aircraft.

Official sources at EGYPTAIR declared the release of all the hostages and the arrest of the hijacker. #EgyptAir

Though the motive of the hijacker remains unknown, this latest incident has elevated concerns over the safety of Egyptian aviation barely five months after the downing of a Russian airliner in the Sinai Peninsula.

Most of the passengers were Russian tourists flying home from a popular tourist destination in the North African country.

Last month, Russia said it was keen on resuming direct flights to Egypt only if the country provides the highest level of security.

The Russian plane crash dealt a blow to the already ailing tourism sector, once a backbone of the economy. This led to several countries including the United Kingdom evacuating their citizens and banning flights to Sharm al-Sheikh resort city, a popular tourist destination. 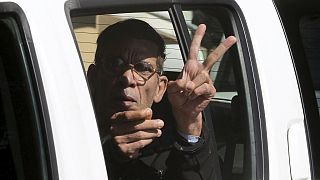