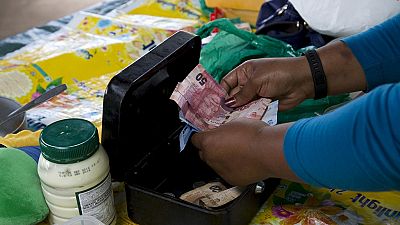 After being overtaken by Nigeria as Africa’s largest economy in 2014, South African investors are increasingly shunning the country’s financial assets.

This happened after the sudden and unexpected cut in the states credit ratings to ‘junk’ grade.

According to Reuters, many investors are unhappy with the manner in which the sitting President, Jacob Zuma is handling the economy, and it is seen at risk of losing its investment-grade status because of weak growth and large deficits.

The reality is that as far as economic growth is concerned, it is a Russian roulette

While visiting his Nigerian counterpart, President Zuma said they are discussing a lot of issues relating to different areas of the economy.

A change in ratings to speculative grade, known as “junk,” typically leads to a sharp rise in borrowing costs.

In this sort of situation, South Africa stands on a faulty scale and it will be bad news with its debt servicing needs already projected by its Treasury to rise to nearly 180 billion rand ($12 billion) in 2018-19.

Data by Reuters indicate the South African dollar debt trading in JP Morgan’s Emerging Markets Bond Index is already yielding more than that of countries with similar credit ratings, such as Romania or India, and even some lower-rated peers like Russia and Turkey.

“Even at investment-grade we are already paying as much as other countries that are sub-investment grade — it’s like we have already been downgraded.”

Rating agency Moody’s placed South Africa on review and it said it was concerned about Pretoria’s ability to restore fiscal strength and boost growth.

The cost of insuring South Africa’s debt against default has also leapt, with its five-year credit default swaps trading at 318 bps on Friday.

In February, the country announced an austere budget aimed at avoiding credit rating downgrades, but investors were not convinced and analysts said a recession is still likely to affect the country.

“The reality is that as far as economic growth is concerned, it is a Russian roulette. Remember that the 0.9 percent impinges on the status quo continuing,” said Lumkile Mondi, an Economic Analyst in February.

South Africa’s economy is being hammered by the collapse in prices of commodity exports that range from coal to gold while its mining industry is shedding jobs by the thousands.

A tale of tragedy is further defined by the worst drought in a century that has forced Africa’s top grain producer to import maize.

The South’s economy is forecast to expand just 0.9 percent in 2016 while the country has a large budget and current account deficits which it has relied on foreign investors to finance.