The main rival to the ruling party’s candidate in Niger’s presidential election run-off says "the results being published are in many cases not in conformity with the expression of the will of the people".

Speaking in the capital Niamey in a heated atmosphere before of dozens of supporters Tuesday, Mahamane Ousmane of the Democratic and Republican Renewal, RDR-Tchandji party, accused the outgoing President Mahamadou Issoufou and his camp of being persistent in ‘’defying the sovereign people of Niger.’’

Opposition supporters chanted slogans as they took part in a demonstration in the streets of Niamey, Tuesday to protest against provisional results of the country's presidential run-off.

The Independent National Electoral Commission (CENI) had not yet published the final provisional results, but the vast majority of the results collated from communes were published on its website, giving leader of the Niger Party for Democracy and Socialism (PNDS), Mohamed Bazoum the win.

Despite the insecurity caused by jihadists in the country, Nigeriens went to the polls for the second time on Sunday February 21 to choose between Mohamed Bazoum, loyal to the incumbent President Mahamadou Issoufou, and main opponent Mahamane Ousmane.

The second round has been marred by the death of at least eight electoral officials. The vehicle of seven of them was hit in the region of Tillabéri, which borders Mali by the west and Burkina Faso in an area known as the "three borders". Another election official was killed in the region of Diffa, located southeast to the border of Nigeria.

The "Three Borders" zone is the target of attacks by jihadist groups, affiliated with the Islamic State Organization. 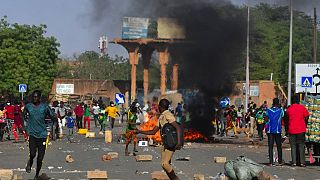