Coronavirus: No spectators at Olympic flame ceremony for 2020 Tokyo Games

Coronavirus fears and a local outbreak of the deadly disease are forced authorities to take unprecedented measures at Thursday’s Olympic Flame lighting ceremony for the 2020 Tokyo Games.

The Olympic flame for the 2020 Tokyo Games was lit in a ceremony in Olympia on Thursday but spectators were be barred because of fears over coronavirus.

After dozens of people tested positive for COVID-19 in the broader western Peloponnese, the Greek Olympic Committee said the ceremony must be held without spectators. Up to 12,000 had been expected to make their way to Olympia, where the ancient Games were held.

Only 100 accredited guests from the International Olympic Committee and the Tokyo 2020 Organising Committee, compared to 700 originally, were allowed to attend the ceremony.

The dress rehearsal on Wednesday was also closed to the public and dinners and galas arranged for the torch lighting have been scrapped.

The only precedent is in 1984 when the Greek leg of the torch relay was abandoned in a protest by Greek organisers against what they saw as the commercialisation of the Los Angeles Olympics.

Greek Prime Minister Kyriakos Mitsotakis has cancelled plans to attend but the state will be represented by President Prokopis Pavlopoulos, a day before his term ends.

The flame for Tokyo 2020 is scheduled to be lit with a traditional ceremony and following a torch relay in Greece will be handed to the Tokyo organisers at another ceremony on March 19 at the Panathenaic Stadium in Athens.

In a statement, Tokyo 2020 said that it would “reduce the size of its travelling delegation as much as possible”.

Greek Olympic shooting champion Anna Korakaki will be the first torch bearer, the first time a woman has been chosen for the role.

Korakaki has called the assignment an “immense honour” and says she hopes to be “the first in a long line of women” to do likewise.

The mayor of Olympia, Yiorgos Georgiopoulos, said the ban on spectators has “disastrous” consequences for local operators, though the government has pledged to help cover financial losses.

“The tourism high point at ancient Olympia is during this period,” the mayor told AFP. “Room cancellations are multiplying and (tourism sector) professionals are desperate,” he said.

The Greek health ministry last week announced a “suspension of all mass gatherings” at theatres, cinemas, museums and sports events in the Peloponnese regions of Achaia and Elis and the island of Zakynthos through Friday.

The measures came after a 66-year-old man was hospitalised with the virus at a hospital in Patras, western Greece. He remains in critical condition.

The patient was part of a group of Holy Land pilgrims who travelled to Israel and Egypt last month. Almost all developed the virus, as have several of their close contacts. 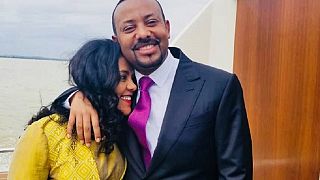