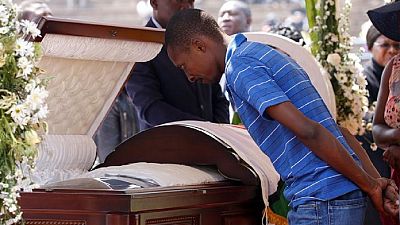 Zimbabwe paid its final tribute on Saturday to its former and highly controversial President Robert Mugabe, the acclaimed “hero” of the independence of a country that he finally left bloodless after a 37-year authoritarian rule.

His successor Emmerson Mnangagwa and several African heads of state, current or retired, began in the middle of the morning to fill the official gallery of the national sports stadium in the capital Harare for a four-hour ceremony.

Among them were South African president Cyril Ramaphosa, Kenyan Uhuru Kenyatta and Equatorial Guinean Teodoro Obiang Nguema, who holds the record of the current heads of state with forty years of rule.

He will only be buried once the construction of this mausoleum is completed.

Robert Mugabe died on September 6 at the age of 95 in a luxury hospital in Singapore where he had been visiting for years for treatment.

Forced to resign two years ago by a coup by the army and his party, he left behind him a country wounded by repression and ruined by an endless economic crisis that plunged a large part of its population into poverty.

Around the grid lawn of soldiers in ceremonial dress, the stadium bleachers, devoid of any portrait of the deceased, slowly filled up when his coffin arrived.

T-shirts and headgear bearing the effigy of the deceased, his supporters welcomed his remains with a salute of songs from the “war of liberation” and a flock of placards and banners greeting the “revolutionary icon” or his “heritage in the service of the nation”.

“I am here to mourn our hero,” said a veteran of the “war of liberation,” Solomon Nyoka, 64. “All that is positive about Zimbabwe, its unity, its reconciliation and the land that is now ours, is thanks to Mugabe.

“It is impossible to talk about Zimbabwe without reference to Bob. Zimbabwe is Bob,” said another nostalgic Norman Gombera, 57, on his way to the stadium.

“It is thanks to a man like Bob, to his bravery, that we were able to obtain our independence,” continued the school principal, minimizing his mistakes. “Bob did his best under the circumstances. Every country has its problems”.

However, these praises are far from being shared on the streets of the capital, Harare, by the average Zimbabwean, who is completely consumed by his daily survival, between unemployment, three-digit inflation and shortages of basic necessities.

“Shortages are the only legacy of his reign. That’s all he’ll leave behind,” said Steven, 45, “I have no reason to go to his funeral,” said the father of the family who prefers to keep his name secret.

“We don’t even have enough fuel to go to his funeral,” said Keshav Therdra, a 59-year-old unemployed man.

Divisive throughout his reign, Robert Mugabe managed to divide his country again after his death on the issue of his burial.

For several days, his family was determined to have him buried in his village in the Zvimba district, about 100 kilometres from Harare. The government of his successor, Emmerson Mnangagwa, wanted to send him to the “National Heroes Acre.

Comrade Bob”, as his party leaders called him, will be buried at the Harare National Monument, but not before a month has elapsed to build a mausoleum for him.

“He will only be buried once the construction of this mausoleum is completed,” said President Emmerson Mnangagwa.

Since the fall of Robert Mugabe, the former president and his family’s relations with Mr. Mnangagwa, whom he publicly described as a “traitor”, have been notoriously bad.

In November 2017, the army had pushed Robert Mugabe out after his decision to dismiss Mr. Mnangagwa, then vice president, at the insistence of his wife Grace Mugabe. The first lady of the time then coveted more and more openly the succession of her ninety year old husband.

The weekly The Zimbabwean Independent on Saturday summed up the arm wrestling with this unequivocal title: “Betrayed, Mugabe continues the fight against Mnangagwa from his coffin”.