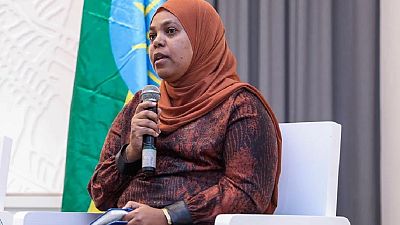 Muferiat Kamil, Ethiopia’s Minister of Peace has made a case for strong democratic institutions if the country is to transit into a real democracy.

The Minister was speaking on Friday during an expert round table session under the auspices of the Prime Minister’s office.

The PM’s office quoted her as saying the government under Abiy Ahmed was committed to build a democracy based on engagement as opposed to authoritarianism.

“Noting the psychology of our institutions have been anti-democratic requiring effort and time to democratize,” the office wrote in a social media post with the Minister making a submission at the Addis Weg session.

Muferiat in 2018 became the first female speaker of the Ethiopian parliament, House of Peoples Representatives. She was later in the year appointed Minister of Peace, a portfolio that covers sensitive security apparatuses.

Also present at the meeting was Prime Minister Abiy Ahmed who was a participant. The Chief Justice Meaza Ashenafi also made submissions calling for the institutionalization of rule of law.

Two academicians from the Addis Ababa University, AAU, also made submissions around the subject of rule of law and the current political reforms being undertaken by government.

PM Abiy Ahmed, who attended the session discussed the responsibility & obligation of the gov’t to legally ensure the supremacy of the law, under the context of legal system of the nation and its institutions.