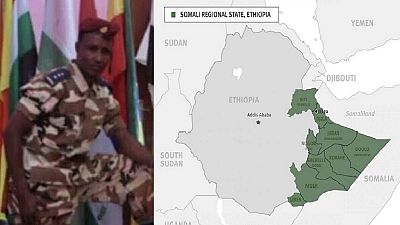 A former head of Ethiopia’s Jail Ogaden and regional prison commissioner has been arrested by authorities, an activist in the country Somali Regional State, SRS, has reported.

Shamaahiye Sheikh Farah [commonly known as Shamaahiye], a former colonel in the controversial SRS paramilitary unit, Liyu Police, is said to have presided over some of the worst infractions in the closed facility.

According to Juweria Ali, an activist and PhD candidate in politics and international relations in the UK, former inmates of the facility recall how Shamaahiye staged a month of hunger in November 2013 – an incident that led to deaths from starvation.

Former prisoners recall one of the worst atrocities planned by Shamaahiye; ‘Qaajadii Hidhaar’ – the month of hunger (November) marks a specific time in 2013 where hundreds of prisoners starved to death.

He is also one of six former officials implicated in gross rights abuses in the Ogaden Jail – main name Jijiga Central prisons located in the capital of SRS, Jijiga. Human Rights Watch, HRW, listed him along others as worst senior offenders in a report this year.

Authorities in the state recently announced the closure of the facility and added that it was to be turned into a museum. Former leader of the state, Abdi Mohamoud Illey is currently in federal cistody facing criminal charges after he was deposed.

The new leader, Mustafa Omar, a known human rights activist has since replaced head of the Liyu police and promised wide ranging rights reforms in a state that was ruled for years under the highhandedness of Illey.

What the HRW report of July 2018 said about Shamaahiye

Shamaahiye Sheikh Farah [commonly called “Shamaahiye”] is a Liyu police colonel. He was head of Jail Ogaden for one year, in 2014, then became Regional Prison commissioner in 2015.

As prison head he was responsible for the conduct of prison guards. Four female former prisoners said he was personally involved in rape of women. Prior to Jail Ogaden, he was head of Abdi Illey’s personal security team.