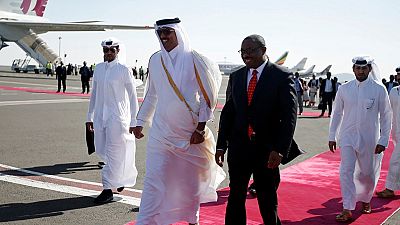 Qatar has lauded efforts of Ethiopia in maintaining peace in the Horn of Africa region. The applause from Emir Sheikh Tamim bin Hamad al-Thani was during a meeting with Ethiopian premier Hailemarian Desalegn.

The state-affiliated FBC reports that the two leaders spoke on areas of strengthening security, investments and diplomatic ties. The Emir is said to have lauded Ethiopia as a strategic partner and one key to peace in the Horn of Africa region.

Desalegn is in Doha on an official visit reciprocating a similar one earlier this year by the Emir to Addis Ababa.

Another Ethiopian state outlet, ENA, reported about diplomatic agreements signed by both countries in the area of visa waivers.

On the issue of the Gulf crisis, Ethiopia reiterated its stance with the Kuwaiti move to resolve the dispute through dialogue. Unlike Djibouti and Eritrea who took sides in the crisis, Ethiopia and Somalia maintained a neutral stance and backed calls for dialogue.