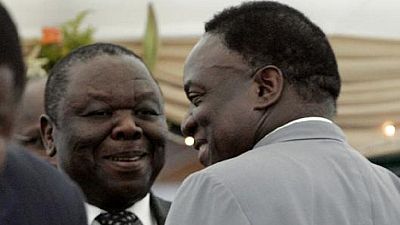 Zimbabwe’s President Emmerson Mnangagwa has ruled out the possibility of forming a coalition government after visiting opposition leader Morgan Tsvangirai on Friday.

“Currently there is no need,” Mnangagwa said about the possibility of forming a coalition with Tsvangirai’s Movement for Democratic Change.

The president was responding to media questions after paying a courtesy visit to opposition leader Morgan Tsvangirai.

Currently there is no need

The president was welcomed by the MDC-T vice president Nelson Chamisa, the party’s director of elections Murusi Zvzivayi and Tsvangirai’s wife Elizabeth Tsvangirai.

The president then told the media that Tsvangirai is recovering well.

“He is fine and recuperating very well and he says he will soon be going back for further medical check-ups in South Africa,” President Mnangagwa said.

Zimbabweans have warmly welcomed the surprise visit of the president Emmerson Mnangagwa to opposition leader Morgan Tsvangira in his Harare home.

The Message here is clear, ED is human and is establishing a KINDER & GENTLER Republic. This gesture, the bottom line is both political protagonists r mature i.e MRT for attending inauguration & EDM for the visit. Approval ratings for ED should soar. #ZimbabweRising

A very nice gesture by his excellency. Keep it up Mr President.

Mnangagwa came to power in November last year following a de facto military coup after which veteran leader Robert Mugabe stepped down after 37 years in power.