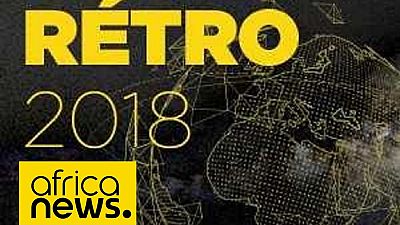 A special tab on the Africanews homepage ‘2018 Review’ is LIVE with a pool of articles and photo stories looking back at the year. We are using an alphabetical arrangement in respect of country reviews. This part concentrates on Djibouti through to Guinea-Bissau.

Djibouti over the course of the year sought UN help to resolve a diplomatic stalemate with Eritrea. They lodged a request with the secretary general to push for mediation over border dispute and the issue of prisoners of war.

In July 2018, a number of African leaders flew in to join President Omar Guelleh to inaugurate a $3.5 billion free trade zone built by a Chinese company.

In addition to the other military bases stationed in the tiny Horn of Africa nation, China opened its first overseas military base even though officially the facility was described as a ‘logistics facility.’

Politics, security and disease, much the usual suspects featured in a long year for DRC, and yet there is still a long way to go as polls are held on December 23 to elect a new set of lawmakers and a president.

Kabila agreed to step down in August 2018, it means that after a two-year delay, DRC could be looking at post-Kabila years. Earlier in the year, anti-government protests were heavily clamped down on including one by the powerful Catholic Church.

In the midst of the chaos, Ebola returned claiming the lives of scores. The WHO responded swiftly along to local authorities. The recent outbreak is marked as the second deadliest in the world.

Insecurity in parts of the country has also affected quite a number of people, even the Ebola responders suffered attacks that made the response perilous.

President Abdul Fattah Al-Sisi contested for a second term and won by a landslide after zooming past an unknown opponent. Opposition call for a boycott is said to have affected turnout.

Then Egypt continued its demands on the Nile waters on which Ethiopia was banking its hopes for the Grand Ethiopian Renaissance Dam project. Talks were held between Ethiopia PM and Al-Sisi whiles foreign affairs ministers and experts also met for talks.

Deadly attacks on especially Egyptian Copts also continued in the year as Al-Sisi continued to drum his resolve to keep all Egyptians safe. The army also reported fighting off terrorists in parts of the country.

Ethiopia – Eritrea made peace after two decades of hostilities. The move had good rebound across the wider Horn of Africa region with nations forging new ties with the view to better cooperation.

The lifting of nine-year old sanctions by the United Nations was another major highlight for Eritrea. It was largely allied to peace with Ethiopia and a shift in US position on the matter.

Asmara has in the wake of the two developments continued to actively engage within the region and beyond. The Gulf states – Saudi and UAE, the United States, European Union, Russia and others have all leaned in start engaging with Eritrea.

The country was also elected to serve on the United Nations human rights council, promising by that, to right human rights issues back home.

When Prime Minister Abiy Ahmed took over Ethiopia was on the brink of implosion, security and political watchers had said. That is no longer the case, even though threats largely exist in the form of insecurity.

Abiy’s inaugural address promised reforms across the board. It promised peace at home and with Eritrea and a better Ethiopia than the one he inherited.

The reforms have been rolling in thick and fast in the area of politics, economy, state institutions etc. The Eritrea peace has been durably delivered and the deadly protests of years ago are gone.

Women represent half of Abiy’s 20-seat cabinet. The country has its first woman president and chief justice. It has first woman defense minister and peace minister and a woman is tasked with the 2020 polls which Abiy has invested time into – meeting opposition groups on charting a way forward.

In December 2017, the Equatorial Guinea government reported having foiled an attempted coup. It wasn’t until early 2018 the government gave details blaming mercenaries from Cameroon and Chad.

VP Teodorin Obiang Nguema was also detained during a trip to Brazil, members of his delegation were said to be carrying huge sums of monies and watches valued in the millions of dollars.

Back at home, he had given orders that lawmakers needing to travel abroad needed clearance from his office. A number of detained opposition members were also freed.

Despite starting late in the year, President Ali Bongo’s ill health has been the biggest news from the oil rich central African nation.

He is currently convalescing in Morocco after being transferred from Saudi Arabia where he was hospitalized when he was in Riyadh for an investment summit. Government recently confirmed that he suffered a stroke.

The International Criminal Court this year said it was dropping a probe into post-election violence in the country. Following chaotic 2016 presidential polls, ICC had said it was considering a probe.

Delayed legislative polls were also held with the ruling party maintaining its majority in the parliament.

The Gambia continued its rebuilding efforts in the post-Jammeh era. But it still had Jammeh looming over the immediate future.

Two commissions related to his era were launched – the truth and reconciliation commission and the financial probe body.

A leak audio also alleged that Jammeh was in talks over a return to the country, he remains in exile in Equatorial Guinea. His mother who died in exile was however brought back home for burial.

Jammeh’s party lost big time in the first legislative polls since his ouster. The Gambia applied for and was readmitted to the Commonwealth after Jammeh led them out in 2013.

Ghana received the world as one of its illustrious sons, Kofi Annan was buried at a military cemetery in the capital Accra. Annan, a former UN secretary general died in Geneva where he was living.

Nyantakyi resigned his posts at CAF and FIFA in the wake of the exposé. The country’s local football was suspended but Ghana managed to escape a FIFA ban by working with the body to institute a normalization committee hoping to get the game back on track.

A rare anti-government protest hit the country as a US-Ghana military cooperation agreement got citizens worried. US first lady Melania Trump picked Ghana as one of four stops on her first solo trip outside of the US.

The West African country had its fair share of protests decrying the governance style of President Alpha Conde. Other planks of the protest were due to economic issues.

The country’s political crisis stretching to last year got to a head, forcing the regional bloc ECOWAS to slap sanctions on the country.

Under ECOWAS sanctions, legislative polls have not been able to be held. The country’s teachers union also held protests over pay.

A wooden boat carrying migrants also got into an accident that reportedly claimed the lives of a number of people.