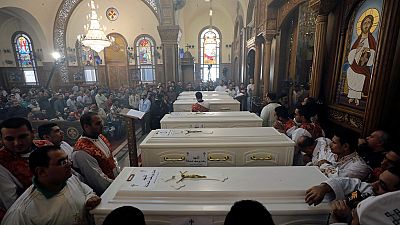 Nineteen jihadists allegedly linked to the anti-Coptic attack that killed seven people on Friday in Minya, central Egypt, were killed in an exchange of “Gun shots” with the police, the Interior Ministry announced on Sunday.

The 19 alleged jihadists were found following the pursuit of terrorist elements involved in the implementation of hostile operations in the country, including the latest armed attack targeting citizens on their return from the monastery of Saint-Samuel,” the ministry said.

At least seven people were killed and seven injured on Friday in an attack claimed by the Islamic State (IS) group in a bus carrying Coptic Christian worshippers near the monastery of St. Samuel in the desert of Minya province.

Terrorist elements opened fire on the (security) forces, who responded.

Raids were carried out in the mountainous areas of the western desert of Minya province to find these “fleeing terrorist elements”, the source added.

“Terrorist elements opened fire on the (security) forces, who responded,” the ministry explained.

EI jihadists regularly attack Copts, who represent about 10% of the population of nearly 100 million Nation. More than 100 people have died in a series of anti-coptic attacks since late 2016.

In May 2017, 28 Coptic pilgrims, including many children, were killed in Minya by armed men while also travelling on a bus in the same area as the Friday attack.

Egypt responded to the attack with air strikes against jihadist camps in Libya.