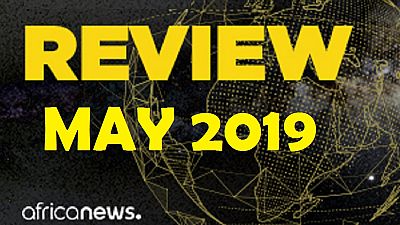 May 2019 served a mixed news bag for the continent with a heavy dose of elections in southern Africa – Malawi, South Africa. Two swearing in ceremonies also took place in Nigeria and Comoros.

Over in Sudan and Algeria, the struggle for transition has yet to materialize with protests still continuing despite the deposing of long-serving leaders Bouteflika and Omar Al-Bashir in April.

As part of our review of major events per month, we review May 2019 as we have done with January, February and March.

Ramadan 2019 kicks off across the world

Muslims around the world started the Ramadan fasting in the first week of May. The unified date of commencement was Monday May 6, 2019 given that the new moon was not sighted across the world.

Muslims worldwide kick off 2019 Ramadan on May 6

2019 Ramadan, how long are Muslims across Africa fasting?

As projected, the ANC won a clear majority but with a much lower percentage. The DA looked to have stagnated, if you want maintained their standing. The biggest winners being the EFF.

By May 11, the final largely uncontested results had been released with the following breakdown for the top three parties:

President Ramaphosa, himself a Member of Parliament, and his colleagues have since been sworn into office. The MPs subsequently voted him as president of the country following which a swearing-in took place on May 25 in Pretoria.

Malawi’s 2019 general elections ended with the contested victory of president Peter Mutharika, who has since been sworn into office for his second and final term.

Voting went on largely peacefully till opposition protested irregularities with tallying. A court subsequently slapped an injunction, filed for by opposition, on the release of results when about 30% of results were yet to be announced.

Days later, the injunction was vacated allowing the electoral body to announce final results that handed Mutharika a second term. He was sworn in same day before an inauguration was held on May 31.

In Sudan, over a month after the ouster of Omar Al-Bashir, the junta has yet to agree on terms of leadership for a civilian-led transition. Progress was made with a legislative set-up during the month.

Under the agreement, the two parties – Forces for Declaration of Freedom and Change (FDFC) and the military – have agreed for a three-year transition period to a civilian administration.

The Transitional Military Council (TMC) disclosed that the FDFC alliance would have two-thirds of the seats on the legislative council. The sticking point this far has been with the sovereign council.

Whiles talks have now been deadlocked, the sit-in that helped depose Bashir continues especially in capital Khartoum, several attempts to break them up by special forces led to the loss of lives but the protesters have held on.

Meanwhile the junta leaders have also been active with movements within the region and the wider gulf. TMC head Burhan in under a week visited Egypt, the UAE, South Sudan and Ethiopia. His deputy Hemedti was also in Saudi Arabia at some point.

It remains to be seen when talks are restarted but protest leaders have roundly accused the army of trying to forcibly disperse protests. The international community has largely called for talks and a quick transition to civil rule.

Sudan protest hub: Our rolling coverage on the post-Bashir crisis

May was a protest filled month in Algeria as the north African country also grappled with events following the ouster of Abdul Aziz Bouteflika.

Security forces and protesters clashed during the traditional Friday protests that are calling for he entire political system to be scrapped before a democratic transition is pursued.

Late in the month, a deadline to register for controversial presidential election passed without a single candidate putting themselves forward, the national radio said.

The brother of Bouteflika was also arrested over corruption charges whiles the army chief still popped up twice – once advocating for polls and before that cautioning that the army will jealously guard state security.

President Buhari of Nigeria was finally sworn in for the second and final term in charge of Africa’s most populous nation.

He had won hotly contested polls in February 2018 even though its legitimacy was the subject of a legal challenge by his main rival and opposition chief, Atiku Abubakar.

Azali has put oil revenue at the centre of his development plans, vowing to make the Comoros an “emerging economy” by 2030.