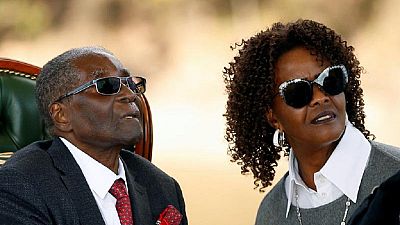 A little over a year out of office, the personality of Robert Gabriel Mugabe loomed large on Zimbabwe politics in the year 2018.

From an outright rejection of the November 2017 “coup” and demanding it be reversed, giving the ruling Zanu-PF a scare with hours to the July 30 vote.

A private birthday for first time in years, sparring with parliament over diamond revenue probe, as expected staying away from Mnangagwa’s swearing in.

Then at a point, along with wife Grace, thanking government for for being gracious and accepting the legitimacy of Mnangagwa as president.

The wrong that happened last November has been erased by his victory in the July 30 elections. We now have a government born out of the constitution. I now accept his leadership and he now deserves the support of every Zimbabwean.

The most recent being a disclosure by his successor that Mugabe is unable to walk due to failing health. One thing is clear, Mugabe attempted to stay in politics by some means.

In his first post ouster interview with South Africa’s public broadcaster, SABC, Mugabe, decried his removal saying: “I never thought he whom I had nurtured and brought into government and whose life I worked so hard in prison to save as he was threatened with hanging, that one day he would be the man who would turn against me.

“I don’t hate Emmerson, I brought him into government. But he must be proper, he is improper where he is. Illegal,” Mugabe said. “We must undo this disgrace, which we have imposed on ourselves. We don’t deserve it.”

Then as a sign that he still wanted a return to front line politics, he endorsed Nelson Chamisa of the main opposition Movement for Democratic Change Alliance in elections Zanu-PF could not afford to lose.

His successor, Emmerson Dambudzo Mnangagwa responded swiftly labeling Mugabe a de-facto leader of the opposition. Zanu-PF made series of threats against its former leader in the wake of what political watchers called a “stunt.”

It wasn’t long before the Mugabes were singing the praises of the government after they were given the necessary support when he traveled for medical checks.

“The wrong that happened last November has been erased by his victory in the July 30 elections. We now have a government born out of the constitution. I now accept his leadership and he now deserves the support of every Zimbabwean,” Mugabe said in September this year, looking frail in video footage on an online television site.

For the first time in decades, Zimbabwe was represented by a new face at the United Nations General Assembly. Scarf-wearing Emmerson Mnangagwa took his “Zimbabwe is open for business,” to the global stage.

In November, a year after his ouster, Mnangagwa revealed that Mugabe could not walk. Maybe the clearest sign yet that the sun is setting or may have set on the political career of one of the continent’s most controversial political leaders.

Mugabe undoubtedly symbolises different things to different people at home, across the continent and around the world. The Blue Roof residence in Harare will sure have more of its occupant as Zimbabwe seeks to build post-Mugabe.