A Kenyan member of parliament has blamed corruption for the collapse of a multi-story building that was under construction in Nairobi.

The building collapsed onto a neighbouring home, killing two people on Thursday.

This is the second building collapse in the Kenyan capital in one week.

"It is all about corruption because no one wants to touch such a property because probably the owners are known, they have the power, they have the money to bribe their way everywhere. But we really need to amend, even empower and make sure we empower the National Construction Authority because they also have no power to bring down such a building", denounced Njuguna Kawanjiku, Member of Parliament for Kiambaa constituency.

Three other people were rescued alive from the rubble of a family home that was next to the collapsed building located in the Ruaka suburb. 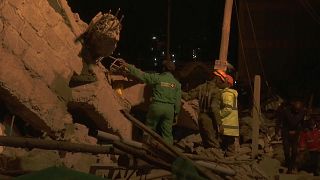