The UN hails a "a very welcome first step,” while Washington claims a “major breakthrough” in regards to Ethiopia's announcement of a cessation of hostilities between the government and the rebels in Tigray after over a week of negotiations led by the African Union in Pretoria, South Africa.

The surprise deal between Prime Minister Abiy Ahmed's government and Tigrayan rebels was unveiled after little over a week of negotiations led by former Nigerian president Olusegun Obasanjo.

The breakthrough was announced almost exactly two years to the day since the war erupted in November 2020.

"Today is the beginning of a new dawn for Ethiopia, for the Horn of Africa and indeed for Africa as a whole," said African Union's mediator, president Olusegun Obasanjo.

"The two parties in the Ethiopian conflict have formally agreed to the cessation of hostilities as well as the systematic, orderly, smooth and coordinated disarmament," Obasanjo added at a briefing in Pretoria.

Diplomatic efforts to bring Abiy's government and the TPLF to the negotiating table had taken on renewed urgency after combat resumed in late August, torpedoing a five-month truce that had allowed limited amounts of aid into war-stricken Tigray.

They were the first formal dialogue between the two sides since the start of the conflict that had raised concerns about the stability of Ethiopia and the volatile Horn of Africa region.

The delegations in Pretoria said it was now up to both sides to honor the agreement, while Abiy himself vowed a "strong" commitment to its implementation.

The head of the government team, Abiy's national security adviser Redwan Hussein, praised the sides for their "constructive engagement to allow the country to put this tragic period of conflict behind us".

Tigrayan delegation chief Getachew Reda said they were ready to "implement and expedite this agreement", adding: "In order to address the pains of our people, we have made concessions because we have to build trust."

The war has forced well over two million people from their homes, and according to US estimates killed as many as half a million.

Despite the peace process in Pretoria, intense fighting had continued unabated in Tigray, where government troops backed by the Eritrean army and regional forces waged artillery bombardments and air strikes, capturing a string of towns from the rebels.

The international community had voiced increasing alarm over the combat and the toll among civilians caught in the crossfire. 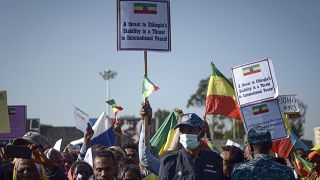