That is what you can call a successful integration. Denis Bouanga joined the Los Angeles Football Club last August. The Gabonese international gifted the Los Angeles derby to his team LAFC on Thursday (Oct 20).

Denis Bouanga has proved to be a good addition to the LAFC team. The 27-year-old had to wait until October 2 and his sixth appearance to score for the first time. Lon Thursday, he scored a brace in his first game of the play-offs, moreover in "El Trafico", the game against neighboring Galaxy.

In a fine form against the former club of Beckham and Zlatan, Bouanga opened the score in the 23rd minute on an opening from the Mexican Carlos Vela.

After French-Senegalese Samuel Grandsir equalized, Bouanga was once again on the receiving end of Ghanaian Kwadwo Opoku's cross to give his side the lead.

LAFC eventually won 3-2 with a goal by Cristian Arango at the end of stoppage time.

Even without Gareth Bale and with Giorgio Chiellini on the bench, the Californians qualified for the Western Conference final. 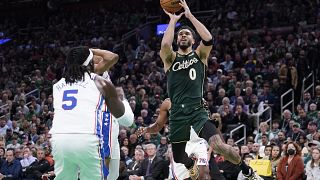