The "goodwill and working visit" as stated by a Malian communiqué came on the eve of two major events.

Bamako’s 62nd independence anniversary and a high-stakes ECOWAS extraordinary summit on the sidelines of the UN general assembly. Guinea’s ruler insisted on the first event:

"I am in Bamako alongside my brother President Assimi to celebrate Mali's independence and to accompany the Malian people. [Mali is] a sister nation, Doumbouya said.  Of course, we know that Guinea and Mali are like one lung, two organs in the same body. It is important to that I be in Bamako to celebrate the independence of Mali with our Malian brothers. "

Asssimi Goïta and Mamadi Doumbouya have many topics to discuss. Both countries are still suspended from ECOWAS bodies following their coup d'état.

West African leaders will discuss Guinea's transition timetable in New York, Thursday. The military rulers have suggested staying in power for three years before handing it over to elected civilians.

In the case of Mali, it is the diplomatic row with the Ivory Coast that should be the center of attention. 46 Ivorian soldiers have been detained in Mali since July. Bamako accuses them of being mercenaries; which Abidjan denies. 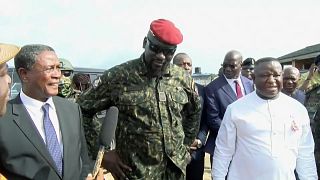