West African mediators met Guinea's ruling junta on Wednesday for talks on a return to civilian rule, according to a regional bloc and state media.

The Economic Community of West African States (ECOWAS), which suspended Guinea after the coup, has rejected this timeline.

The acting head of ECOWAS, Guinea-Bissau President Umaro Sissoco Embalo, as well as the president of the bloc's commission, Gambian diplomat Omar Alieu Touray, landed in Conakry on Wednesday, a source at the Guinean president's office told AFP.

The ECOWAS mediator for Guinea, Benin's former president Thomas Boni Yayi, has been in the Guinean capital since Tuesday, an official from the West African bloc confirmed. The three men met Doumbouya as well as the acting prime minister and other officials, the source added.

Their gathering was shown on state television, but the contents of their discussions were not disclosed.

The head of Guinea's main political party, former prime minister Cellou Dalein Diallo, on Wednesday sounded the alarm over what he called a "dangerously growing list of breaches of fundamental rights".

The National Alliance for Change and Democracy (ANAD), which comprises about 20 organisations, separately protested against a "travel ban" being imposed on opposition leader Oumar Sylla.

Sylla, a member of the National Front for the Defence of the Constitution (FNDC), had been set to take part in a West African civil society gathering in Senegal from Tuesday to Thursday, but his group said he was prevented from boarding the plane.

The Guinean authorities declined to comment. Sylla was among three members of the FNDC found not guilty of contempt of court this month over comments they had posted on social media criticising the prosecutor's office and the military-appointed parliament.

Their arrest had sparked violent protests, some of the first since Doumbouya toppled president Alpha Conde last year.

The ruling junta had banned political protests in May. 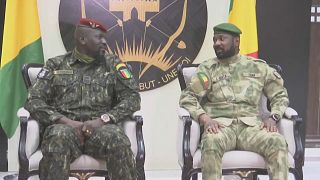