Algeria has welcomed French President Emmanuel Macron for an official visit of three days. The French president was received Thursday afternoon on the tarmac of the airport by his Algerian counterpart Abdelmadjid Téboune, to the sound of the anthems of both countries played by a military band.

No less than 90 people accompanied the French president. Among them: seven ministers, parliamentarians, leaders of major groups and even sportsmen.

The two heads of state visited a monument on Thursday to martyrs of the country's war for independence, which ended more than 130 years of French colonial rule with Algeria's independence in 1962.

This is the second time that the French president visits the country, after 2017. But relations, already haunted by the memory of colonization and war, suffered a blow a year ago after Emmanuel Macron's criticism of Algerian power.

The French president's main objective is to revive the bilateral relationship. Many observers believe that it is above all a question of Paris reconciling with Algiers, which is rapidly becoming essential for its gas, on which Europe is cruelly dependent for lack of Russian supplies. 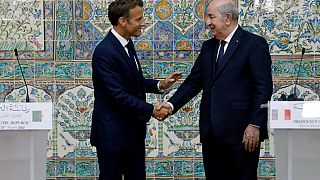