Libya's Fathi Bashagha, appointed as prime minister in a challenge to a unity government in Tripoli, plans to take office in the capital "in the coming days", he told AFP.

Libya's parliament picked the former interior minister in February to lead a government to replace that of interim premier Abdulhamid Dbeibah, appointed last year as part of a United Nations-backed peace process to end more than a decade of violence in the North African country.

But Dbeibah has refused to hand over power before elections, setting up a showdown with Bashagha, named by the eastern-based legislature elected in 2014 and backed by military strongman Khalifa Haftar.

In May, Bashagha arrived in the capital Tripoli in the country's west and attempted to take office there, sparking pre-dawn clashes between armed groups supporting him and those backing Dbeibah.

He backed down, he told AFP, to avoid bloodshed, but says he has since received "positive invitations" to enter the capital.

"All the roads are open into Tripoli and God willing we'll be there in the coming days," he said in an interview Friday, speaking via Zoom from his temporary base in the central city of Sirte.

"Some armed forces have changed their position and have nothing against us entering the capital."

Both Bashagha and Dbeibah come from the western city of Misrata and are backed by different forces in Tripoli.

Their rivalry is the latest configuration of the complex power struggles that have riven the country since the 2011 NATO-backed revolt that toppled and killed dictator Moamer Kadhafi.

Dbeibah came to power following a landmark 2020 ceasefire that ended a year-long battle as Haftar tried, unsuccessfully, to seize the capital by force.

The transitional government had a mandate to lead the country to elections last December, but they never took place due to divisions over the rules and the presence of controversial candidates.

"Its mandate is over and it failed to make elections happen," he said.

For elections to take place, he added, "the only condition is that Libya only has one government. Two governments is not acceptable."

Bashagha, a 59-year-old former fighter pilot trainer, was interior minister between 2018 and 2021, when he worked to reduce the influence of militias and bring fighters into state-run forces.

He has been seen as one of the few major Libyan actors to have good relations with foreign powers backing rival sides in the country.

But the emergence of two rival administrations -- as was the case between 2014 and 2020 -- has sparked fears of a return to an armed struggle for power.

Bashagha said he did not believe there would be a return to war.

But, he warned, "there might be chaos because of demonstrations".

His comments came days after protestors stormed Libya's parliament building in the eastern city of Tobruk, demonstrating against the political elite -- including both Dbeibah and Bashagha -- and deteriorating living conditions.

Though it sits on Africa's largest proven oil reserves, decades of stagnation under Kadhafi and its bloody conflict have left the country's economy shattered and its population mired in poverty.

The three days of demonstrations, fuelled by public anger over chronic power cuts that have shut down air-conditioning units at the height of summer, also hit other cities including Tripoli and the eastern city of Benghazi.

"I believe these popular demands are legitimate and the protests will continue after Eid," Bashagha said, referring to the Muslim holiday starting on Saturday.

Dbeibah's government has blamed the power cuts partly on fuel shortages caused by a blockade of key oil installations in Libya's east, by groups demanding Dbeibah's departure and a handover to Bashagha's government.

But Bashagha insisted there was "no link".

Once residents of the "Oil Crescent" region are "reassured that the revenues will not go to corruption, or theft or to other places, they will lift the siege on the oil exports", he said.

The UN has been critical of the way Bashagha's administration was appointed.

But Bashagha called on the world body "to adopt solutions that work for Libyans rather than just for the states that are interfering in Libya".

"We've succeeded in avoiding any military confrontation but Libya can't stay like this forever," he added.

"There has to be a solution." 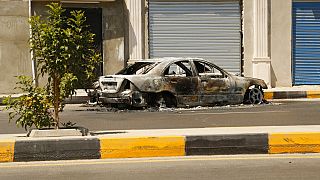 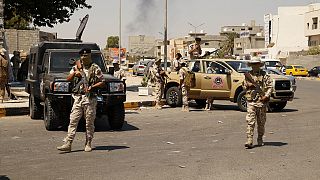