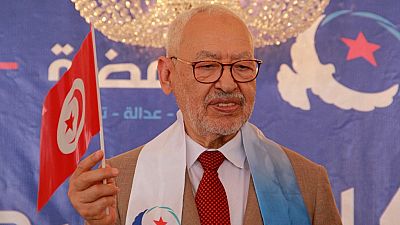 A Tunisian court on Tuesday froze the bank accounts of several of President Kais Saied's main opponents, including Rached Ghannouchi, head of the dissolved parliament and the Islamo-conservative Ennahdha party.

The Tunisian Financial Analysis Committee issued a statement informing banks that they should "immediately implement the decision of the investigating judge of the anti-terrorist unit".

Among those on the list are Mr Ghannouchi, his son Mouadh, former Prime Minister Hamadi Jebali and former Foreign Minister Rafik Abdessalem, all of whom are prominent members of the Ennahdha party.

The statement did not mention the reasons for the order.

A court had already imposed a travel ban on Ghannouchi at the end of May as part of an investigation into obstruction of justice in connection with the killings of two opponents in 2013.

Mr Jebali is under investigation for suspected "money laundering" in connection with money transfers from abroad to a charity in Tunisia.

He was arrested at the end of June before being released four days later. He is due to appear before an anti-terrorism court on 20 July.

Tunisia's long-running political crisis took a new turn in July 2021, when Mr Saied seized full power by sacking the prime minister and suspending the Ennahdha-dominated parliament, rocking the young democracy that was the cradle of the Arab Spring.

Last week, he unveiled a controversial draft of a new constitution amid accusations of authoritarian drift. It is to be submitted to a referendum on 25 July.

The draft gives sweeping powers to the head of state, marking a radical departure from the rather parliamentary system in place since 2014, which has been a source of recurrent conflicts between the executive and legislative branches.