"A lot of them (the incoming migrants) have misconceptions about what Rwanda is like and about what Africa is like and to be quite honest some of this is perpetrated by media, and that does not reflect the reality of our countries."

The words of Rwandan government spokesperson Yolande Makolo at a press conference in Kigali. "The accommodation facility is not a detention facility, they will be free to come and go, ....." she added.

Her government is defending a plan to receive from the UK, asylum seekers to Rwanda. Rwanda has reportedly received an upfront payment of 148 million dollars for the deal.

On Tuesday, the UK government defended the controversial plan even as the entire senior leadership of the Church of England branded it shameful and immoral.

Foreign Secretary Liz Truss insisted the first flight to Kigali, believed to be operated by Spanish charter firm Privilege Style, would take off, no matter how many people were on board.

Only seven people are now due to be deported because of legal challenges and reviews of their cases -- well down on the 130 initially envisaged by the authorities.

"We're expecting to send the flight later today," Truss told Sky News but said she was unable to confirm the numbers due to be on board.

"There will be people on the flights and if they're not on this flight, they will be on the next flight," she added.

Truss said the policy, which the UN refugee agency has criticised as "all wrong", was vital to break up human-trafficking gangs exploiting vulnerable migrants.

Record numbers of migrants have made the perilous Channel crossing from northern France, heaping pressure on the government in London to act after it promised to tighten borders after Brexit.

British media said some 260 people attempting the crossing in small boats were brought ashore at the Channel port of Dover by 1200 GMT on Tuesday.

More than 10,000 have crossed since the start of the year.

Legal challenges in recent days have failed to stop the deportation policy, which the two top clerics in the Church of England and 23 bishops said was "immoral" and "shames Britain".

"They (migrants) are the vulnerable that the Old Testament calls us to value," Archbishop of Canterbury Justin Welby and Archbishop of York Stephen Cottrell wrote in a letter to The Times.

"We cannot offer asylum to everyone, but we must not outsource our ethical responsibilities, or discard international law -- which protects the right to claim asylum."

It was reported last weekend that Queen Elizabeth II's heir, Prince Charles, had privately described the government's plan as "appalling".

But Truss said: "The people who are immoral in this case are the people traffickers trading on human misery.

"Our policy is completely legal. It's completely moral," she added, accusing critics of having no alternative plan.

In Kigali, government spokeswoman Yolande Makolo told reporters it was an "innovative programme" to tackle "a broken global asylum system".

"We don't think it is immoral to offer a home to people," she told a news conference.

An undeterred Boris Johnson meanwhile told his senior ministers the policy was "the right thing to do".

The prime minister accused opponents of "undermining everything that we're trying to do to support safe and legal routes for people to come to the UK" and "abetting the work of criminal gangs".

But she insisted it was "value for money" to reduce the long-term cost of irregular migration, which the government says costs UK taxpayers £1.5 billion a year, including £5 million a day on accommodation.

In the Channel port of Calais, in northern France, migrants said the risk of deportation to Rwanda would not stop them trying to reach Britain.

Moussa, 21, from the Darfur region of Sudan, said "getting papers" was the attraction. "That's why we want to go to England," he said.

Hostel manager Ismael Bakina says up to 100 migrants can be accommodated at a rate of $65 per person a day.

"This is not a prison. It's a home like our home," Bakina told AFP. "In a hotel a person will be free in everything they want. When they want to go out of the hotel, it's no problem."

As part of the agreement, anyone landing in Britain illegally is liable to be given a one-way ticket for processing and resettlement in Rwanda.

The government in Kigali has said the deportations will begin slowly and rejected criticism that Rwanda is not a safe country and that serious human rights abuses were rife. 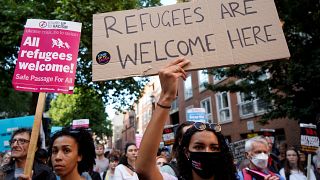