Whilst the art form of henna may be thousands of years old, just like any fashionable trend it has taken many a stylish twist and turn down the years.

The temporary staining of women’s hands and feet, in elaborate, symmetrical and geometric patterns, has deep roots in the Arabian Peninsula, Indian subcontinent and North Africa.

Its appearance is commonplace at celebratory occasions like weddings, Diwali and Eid.

Traditionally, henna plant leaves were powdered and mixed with water, lemon juice and sugar to make a smooth paste, easily applied to the skin.

However, to prolong the art’s appearance beyond a week, some commercial suppliers took to adding potentially harmful ingredients such as paraphenylenediamine, found in hair dye.

Filling a commercial gap in the market, she incorporates essential oils, eucalyptus and lavender into her henna powder, to nourish and beautify the skin safely.

“Anything you find, that's been on the shelf for a while, is not fresh. There will always be chemicals in there,” she told Rebecca McLaughlin-Eastham. “So, I wanted to provide people with something they can use at home and mix by themselves.”

A chiropractor by day, Khamissa’s henna passion project quickly gained a sizeable following on social media, as she showcased her contemporary, often boundary-pushing motifs on platforms like Instagram.

“The most popular design is the one that I call ‘a glove’,” says Khamissa.“And the design was inspired by the anatomy of the body. It goes all the way through the fingers and all the way around the hand.”

“Beyond that, everybody loves moons, especially for Ramadan and Eid,” she adds. “And girls love floral work.”

Khamissa’s aim is to blur ethnic and cultural lines associated with henna, making it accessible for all.

Her current muse is a British rapper and activist, for whom she has penned a particularly wild design.

“It would have to be for M.I.A,” she says of the recording artist. “I really want to do a full body leopard print [for her] at some point. Although that might be a bit risqué, in my world. But I think it would just be amazing to try and draw it on someone.” 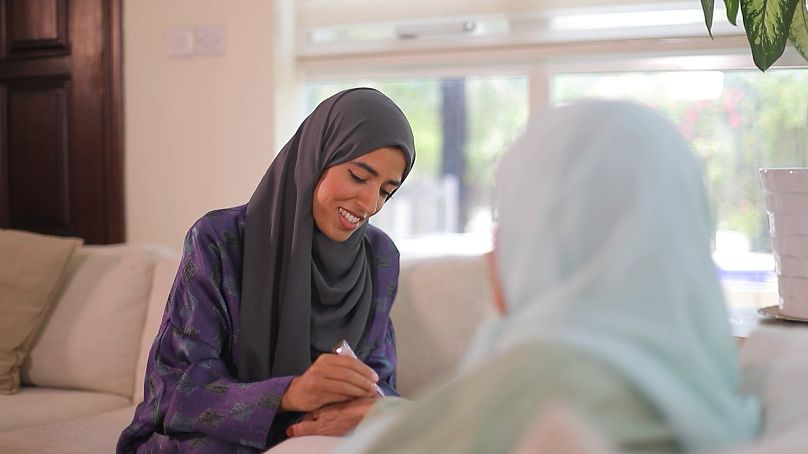 Khamissa dyes a customer’s hand with her henna design

Khamissa has ambitions to take her brand beyond the Middle East region in the years ahead. Not least to capitalize on the growing global trend for temporary tattoos, an industry worth more than $827 million last year, according to Market Watch.

“I would love for it to be possible for anyone, at any time, to be able to find a quality henna product,” the young entrepreneur says. “Worldwide, I mean, maybe not so much [only] within the Middle East.”

As Khamissa continues to build her temporary henna tattoo empire one inking at a time, only time will tell whether she’s able to leave a permanent mark on the impermanent beauty market.