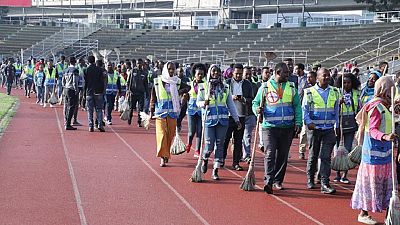 In Ethiopia, a sense of communal unity and togetherness underlined the events leading up to 2019 Eid festivities.

From the clean up of places of worship by members of the wider society through to the provision of free public transport for worshippers in some parts of the country.

As at late last week, the privately-owned Addis Standard reported about how the members of the police, young people and local level officials had taken part in cleaning three major mosques associated with the Eid.

The office of the Prime Minister Abiy Ahmed also over the weekend had engaged in the regular monthly cleanup with the view to contribute to preparations towards the Eid.

PM Abiy Ahmed together with Ethiopian Orthodox Sunday school students cleaned the area around stadium in preparation for Eid al-Fitr. As Muslim brothers & sisters celebrate the end of the holy month of Ramadan, fellow Christians are showing their solidarity through cleaning. pic.twitter.com/o4yxY9WBBq

With barely 24-hours to the day of Eid (June 4), religious leaders in the most expansive region – Oromia – were joined by community members and civil servants to help clean up places of worship as a means of solidarizing with fellow Muslims who were preparing for the festivities.

Hours after it was confirmed that Ethiopia will join Muslim faithful around the world to celebrate the Eid on Tuesday, the Addis Ababa City Administration also announced a free transport system to facilitate movement of worshippers.

“As Eid al-Fitr is announced to officially begin on Tuesday, Addis Ababa city admin said more than 800 public buses ready to provide free services to hundreds of thousands of Muslims coming to the main Stadium. The stadium was cleaned by more than 2000 volunteers today,” Addis Standard noted in a tweet.

A journalist, Samuel Getachew, had also tweeted that public transport outfits were set to offer the free services to mark the day.

PM Abiy Ahmed earlier in the month joined the Muslim faithful for a conference of its leaders in the capital Addis Ababa. He stressed the importance of a strong Muslim population in securing the unity of the country.

He also hosted members of the Muslim community for iftar – the fast breaking meal – on May 11. “In his remarks, he shared how the values of peace, unity, forgiveness, giving & reconciliation are espoused in the holy month, sharing his hopes that these values extend into several months,” his office said.

The mélange of religions spans Christianity, Islam and a handful Jewish community. Christianity (Ethiopian Orthodoxy, Pentay, Catholic) accounts for over 62%, followed by Islam at 33.9%. The Jewish community and others share the remaining percentage.