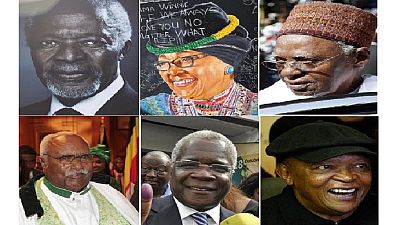 Over the course of the year, Africa lost a number of its illustrious sons and daughters. The loss started early in the year when a renown musician was announced dead – Hugh Masekela of South Africa.

Late in the year, Nigeria lost a former president in the person of Alhaji Shehu Shagari – its first executive president who incidentally was deposed by the current president Muhammadu Buhari.

In between Masekela and Shagari, there is the death of yet another former president, a strong anti-apartheid voice, two leading opposition chiefs in southern Africa and the biggest loss by a mile, the death of Kofi Annan.

As part of our 2018 Review, Africanews brings back briefs on the losses that hit the continent.

The news was confirmed by a senior official in his Movement for Democratic Change (MDC) party. Tsvangirai died in South Africa at the age of 65.

Arguably Zimbabwe’s most popular politician, the former union leader’s career was ultimately defined by his tussles – both literal and figurative – having formed MDC in 1999 against Mugabe.

Tsvangirai had just appointed Nelson Chamisa, the youngest of his three deputies, as acting party president until his return but he had not decided on a successor.

The legendary South African musician and song writer, Hugh Masekela died in Johannesburg at the age of 78, his family confirmed in a statement.

The statement of Tuesday January 23, 2018 said he died after a protracted fight against cancer. The celebrated jazz musician was born on April 4, 1939.

It hailed his legacy in diverse fields beyond his music and disclosed that details of his memorial and burial were being worked out.

“She died after a long illness, for which she had been in and out of hospital since the start of the year,” Victor Dlamini said in a statement.

“She succumbed peacefully in the early hours of Monday afternoon surrounded by her family and loved ones.”

She received a state funeral later that month which was very well attended by leaders and dignitaries from across the continent.

May: Afonso Dhlakama of Mozambique

Dhlakama’s Renamo party said at the time that he passed away after an unconfirmed heart attack, with local television stations also reporting the death.

For 39 years, Dhlakama led Renamo, the rebel group which fought a 16-year war against the ruling Frelimo party until 1992 and then emerged as an opposition party that still retained armed fighters.

He had been in hiding since 2013 in the remote Gorongosa mountains as sporadic conflict again erupted in the country. he had entered peace talks with President Nyusi in 2017 having announced a ceasefire in December 2016.

The former United Nations Secretary-General, Kofi Atta Annan died in Geneva, Switzerland in August 2018. He was laid to rest in mid-September in his native Ghana – specifically at a military cemetery in the capital, Accra.

The burial was preceded by a full state funeral that was attended by people from all walks of life including leaders from all over the world.

Annan, a Ghanaian national and Noble peace prize laureate, died in a Swiss hospital at the age of 80. He was surrounded in his last days by his second wife Nane and children Ama, Kojo and Nina.

Girma was president of Ethiopia for twelve years between 2001 to 2013, a largely ceremonial role. His death was reported by the Ethiopia Broadcasting Corporation (EBC) and other state media.

The cause of death was not given. He was a fluent speaker in Ethiopia’s working language Amharic, his native language Afan Oromo as well as English and French.

His funeral and burial was held five days later at the Holy Trinity Cathedral located in the capital Addis Ababa. It was attended by President Sahle-Work Zewde, Prime Minister Abiy Ahmed and other top government officials.

The death of Alhaji Shehu Shagari, Nigeria’s first executive president at the age of 93, was announced via Twitter by his grandson with three days to the New Year, 2019.

Shagari is on record as the first executive president Nigeria had. He won elections in 1979 to become president under the banner of the National Party of Nigeria.

Today I paid a condolence visit to the family of former President Shehu Shagari, in Sokoto. May his soul rest in peace, and may Almighty Allah comfort the family. pic.twitter.com/1JFhYAfYAi