<p>Only Central Africa will not have a feel of the United States First Lady Melania Trump when she visits the continent in October 2018.</p> <p>After an announcement in <a href="http://www.africanews.com/2018/08/21/mrs-trump-to-visit-africa-keen-to-learn-about-rich-culture-and-history/" target="_blank">August </a> that she will visit the continent on her first solo trip, Mrs. Trump has finally released a list of her destinations.</p> <p>Ghana (West Africa), Kenya (East Africa), Egypt (North Africa) and Malawi (Southern Africa) are the list of countries as reported by media outlets and White House correspondents on Wednesday.</p> <blockquote class="twitter-tweet" data-lang="en"><p lang="en" dir="ltr">UN: Melania Trump is going to Africa, partnering w/ <a href="https://twitter.com/USAID?ref_src=twsrc%5Etfw"><code>USAID</a>, on Oct. 1. Ghana, Kenya, Malawi and Egypt. She will make her child-focused "Be Best" efforts a backbone of her trip. But also mentioned importance of women and religious minorities leading "productive and healthy lives."</p>— Katie Rogers (</code>katierogers) <a href="https://twitter.com/katierogers/status/1044974778526953473?ref_src=twsrc%5Etfw">September 26, 2018</a></blockquote> <script async src="https://platform.twitter.com/widgets.js" charset="utf-8"></script> <p>A statement from her office in August stated that Mrs. Trump was excited about traveling to Africa for the first time and that she was eager to learn about the cultures and history of her hosts.</p> <p>“This will be my first time traveling to Africa and I am excited to educate myself on the issues facing children throughout the continent, while also learning about its rich culture and history.</p> <p>“We are a global society and I believe it is through open dialogue and the exchanging of ideas that we have a real opportunity to learn from one another, the statement added.</p> <p>Her husband, Donald Trump, has yet to visit Africa since becoming president in early 2017. He received huge backlash after he was reported to have described Africa as a shithole. Trump denied using the racist slur.</p> <p>He confirmed to Egyptian president Abdel Fattah Al-Sisi that he will visit the North African country sometime. Aside Al-Sisi, Nigerian president Muhammadu Buhari and Kenyan president Uhuru Kenyatta have met with Trump at the White House this year.</p> <blockquote class="twitter-tweet" data-lang="en"><p lang="en" dir="ltr">.<a href="https://twitter.com/FLOTUS?ref_src=twsrc%5Etfw"><code>FLOTUS</a> Melania Trump: "I&#39;m excited to work with them in my upcoming trip to Africa." <a href="https://t.co/OsQJGq8Dv6">pic.twitter.com/OsQJGq8Dv6</a></p>&mdash; The Hill (</code>thehill) <a href="https://twitter.com/thehill/status/1044982042528796673?ref_src=twsrc%5Etfw">September 26, 2018</a></blockquote> <script async src="https://platform.twitter.com/widgets.js" charset="utf-8"></script> <iframe src="//embed.scribblelive.com/Embed/v7.aspx?Id=2815901 &ThemeId=19714" width="100%" height="1200" frameborder="0"></iframe> 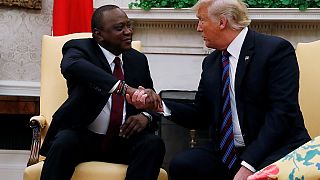 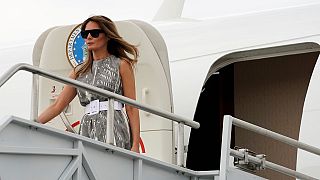 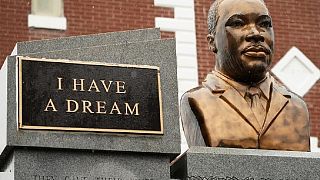