Theresa May in Kenya: More dancing, a bicycle politician and more deals 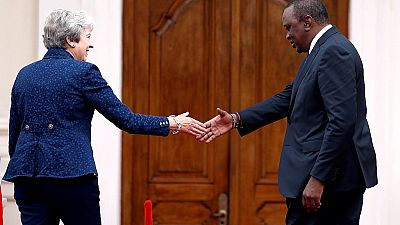 As the British Prime Minister Theresa May ended her three-nation tour of Africa in Kenya on Thursday, she danced with children yet again, even as she pledged post-Brexit trade continuity.

Her counterpart on the other hand, president Uhuru Kenyatta struggled to recall the last high profile dignitary his country hosted from the United Kingdom.

May was the first British prime minister to visit Kenya in 30 years.

As Britain prepares to leave the European Union we are committed to a smooth transition that ensures continuity in our trading relationship with Kenya, ensuring Kenya retains its duty-free, quota-free access to the UK market.

On Tuesday, May kicked off her three-nation visit in Cape Town, South Africa, pledging to prioritise investment in Africa, although it was her diffident dance moves rather than diplomacy that captured the headlines.

May declared her ambition for Britain to become the G7’s biggest investor in Africa by 2022 and announced a new four-billion-pound ($5.1 billion, 4.4 billion euro) investment programme.

The ambitious and rare trip to Africa is part of May’s campaign to promote Britain’s global ambitions and relations with just seven months left until Britain formally leaves the world’s biggest trading bloc.

Theresa May the dancer

After showing off awkward dancing moves in South Africa, May took to the dance flooryet again, this time dancing with a group of scouts as she visited the United Nations office in Kenya’s capital Nairobi.

At the joint press conference addressed by May and Kenyatta, it was the latter’s turn to blush as he struggled to remember the surname of former foreign minister Boris Johnson, who visited last year, eventually referring to him as “the bicycle guy”.

After meeting with May, Kenyan President Uhuru Kenyatta said he felt reassured, amid the uncertainty brought on by Britain’s decision to quit the EU next year.

“I don’t see Brexit as meaning anything detrimental towards the strong trade ties we have,” Kenyatta said.

In Kenya, as in South Africa and Nigeria earlier this week, May was eager to ease worries and emphasise opportunities as Britain leaves the EU.

“As Britain prepares to leave the European Union we are committed to a smooth transition that ensures continuity in our trading relationship with Kenya, ensuring Kenya retains its duty-free, quota-free access to the UK market,” she said.

“Continuity is what’s important, to business, to traders: no cliff-edge, no sudden disruption to trading relationships,” May added.

The leaders agreed to strengthen security cooperation, with British soldiers regularly training in Kenya and to ensure that proceeds of Kenyan corruption stashed in British banks would be repatriated to Kenya.

“We signed an agreement to ensure that any proceeds of corruption in Kenya that end up in the UK will be given back to the Kenyan people and spent for their benefit,” May said.

She added that cooperation on anti-terrorism and law enforcement was not one way.

“Already British terrorists and child abusers are in UK jails because of our cooperation,” she said.

Witnessed the signing of an agreement between Kenya?? and the United Kingdom?? on the framework for the return of assets from corruption and proceeds of crime #KenyaBritainRelations | theresa_may 10DownStreet ForeignOfficeKE pic.twitter.com/op0570ddY3

Britain remains Kenya’s biggest trading partner but the relationship has stagnated in recent years with Kenyan exports growing only marginally and British exports to Kenya falling.

May’s visit comes as Kenyatta returns from meeting with President Donald Trump in Washington and before all three of the heads of state she met travel to Beijing to participate in a China-Africa summit.

As the US and European nations have neglected the continent, African leaders have increasingly turned to China for no-strings-attached loans to fund large infrastructure projects and opened their markets to cheap Chinese goods.