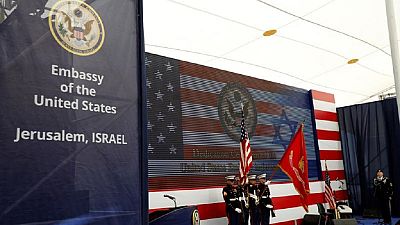 <p>A dozen African countries were present for the United States’ controversial relocation of its embassy in Israel from Tel Aviv to Jerusalem, the Isreali news portal Haaretz reported.</p> <p>The ceremony was held on Monday with adviser and daughter of president Donald Trump, Ivanka Trump, in attendance. It comes about five months after Trump took the decision which was widely condemned by the United Nations and allies of the U.S.</p> <p>Some of the countries in question had <a href="http://www.africanews.com/2017/12/22/togo-only-african-nation-to-back-trump-on-jerusalem-vote-despite-au-stance/" target="_blank">voted against</a> the move in December 2017. Interestingly, the only African country that voted along with the resolution, Togo, was absent.</p> <p>The twelve countries were: Angola, Cameroon, Congo Republic, the Democratic Republic of Congo, Ivory Coast, Ethiopia, Kenya, Nigeria, Rwanda, South Sudan, Tanzania and Zambia.</p> <p>Of the twelve, Rwanda, Cameroon, South Sudan abstained in the December 2017 vote whiles the remaining nine voted against the U.S.</p> <blockquote class="twitter-tweet" data-lang="en"><p lang="en" dir="ltr">Any one around explaining why Ethiopia is attending?<br /> <br /> Via <a href="https://twitter.com/haaretzcom?ref_src=twsrc%5Etfw"><code>haaretzcom</a> <a href="https://t.co/btLaV844Xa">pic.twitter.com/btLaV844Xa</a></p>— Zelalem Kibret (</code>zelalemkibret) <a href="https://twitter.com/zelalemkibret/status/996140310118981633?ref_src=twsrc%5Etfw">May 14, 2018</a></blockquote> <script async src="https://platform.twitter.com/widgets.js" charset="utf-8"></script> <p>The opening of the embassy reignited protests by Palestinians on the Gaza border whiles a heavy Israeli security clampdown led to scores of deaths with thousands injured. South Africa has since <a href="http://www.africanews.com/2018/05/15/south-africa-recalls-ambassador-to-israel-following-death-of-55-palestinian/" target="_blank">withdrawn its ambassador</a> in protest to the crackdown.</p> <p>Palestinians seek East Jerusalem as the capital of a state they hope to establish in the occupied West Bank and the Gaza Strip.</p> <p>Israel regards all of the city, including the eastern sector it captured in the 1967 Middle East war and annexed in a move that is not recognised internationally, as its “eternal and indivisible capital”.</p> <p>Most countries say the status of Jerusalem, a sacred city to Jews, Muslims and Christians – should be determined in a final peace settlement and that moving their embassies now would prejudge any such deal.</p> <p><strong>Trump’s recognition of Jerusalem as Israeli capital</strong></p> <p>On December 6, 2017; Trump officially announced that the U.S. formally recognised the contested city of Jerusalem as Israel’s capital and that plans were afoot for their embassy be moved.</p> <p>World leaders slammed the move calling it a setback for peace efforts between Israel and Palestine and a security risk to the larger Middle East region. The European Union, the United Nations and African Union have all expressed worry over Trump’s move.</p> <p>The move provoked series of anti-American protests across the Muslim world. Deadly clashes erupted between Israelis and Palestinians in Gaza. Somalia, Djibouti, Egypt and other African countries expressed their condemnation.</p>