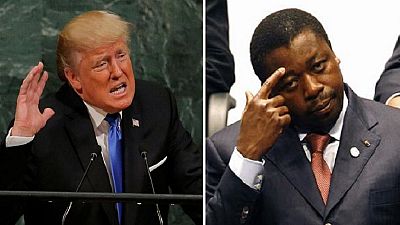 <p>Togo on Thursday voted with the United States in Washington’s resolution to recognize Jerusalem as the capital of Israel. </p> <p>But at the end of the day, it was Togo, the United States and seven others against the motion whiles 128 other countries voted in favour of the motion rejecting the U.S. move.</p> <p>Out of the 35 countries that chose to abstain, there were a number of African countries including Rwanda, Cameroon, Equatorial Guinea, Benin, Malawi, South Sudan and Uganda.</p> <p>Togo’s position comes as a surprise to many political watchers given that the African Union had put out a position that others like Ethiopia (a current member of the Security Council) had openly said they were backing.</p> <p>The United States ahead of the vote had issued a threat to countries that it was going to take note of all those who voted against their move. Botswana is the only African country so far to have officially responded calling the U.S. bluff.</p> <h2> Trump’s recognition of Jerusalem as Israeli capital </h2> <p>On December 6, 2017; Trump officially announced that the U.S. formally recognised the contested city of Jerusalem as Israel’s capital and that plans were afoot for their embassy be moved.</p> <p>World leaders have since slammed the move calling it a setback for peace efforts between Israel and Palestine and a security risk to the larger Middle East region. The European Union, the United Nations and African Union have all expressed worry over Trump’s move.</p> <p>The move has provoked series of anti-American protests across the Muslim world. Deadly clashes have erupted between Israelis and Palestinians in Gaza. Somalia, Djibouti, Egypt and other African countries have expressed their condemnation.</p> <h2>What has the A.U. Chief said about U.S. position on Jerusalem</h2> <p>“The Chairperson of the African Union Commission, Moussa Faki Mahamat, notes with deep concern the decision of the United States Government, announced today, to recognize Jerusalem as the capital of the State of Israel. </p> <p>“He regrets this decision, which will only increase tensions in the region and beyond and further complicate the search for a solution to the Israeli-Palestinian conflict.</p> <p>“The Chairperson of the Commission reiterates the solidarity of the African Union with the Palestinian people and its support to their legitimate quest for an independent and sovereign State with East Jerusalem as its capital. </p> <p>“In this context, he calls for renewed international efforts to find a just and lasting solution to the conflict, based on the existence of two States, Israel and Palestine, living side-by-side in peace and security, within the framework of relevant African Union and United Nations pronouncements.”</p>