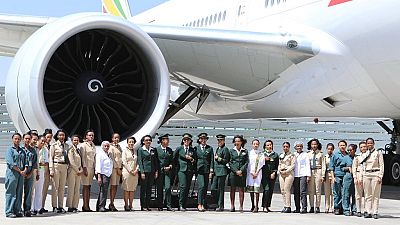 Ethiopian Airlines scores another all-female flight crew feat as it expands its global footprint to the Argentine capital, Buenos Aires – its first such flight.

The flight takes off on the occasion of the International Women’s Day and according to the Addis Standard news portal the crew will be operating the B787 Dreamliner from Addis Ababa to Buenos Aires.

It is not the first time Africa’s top flier has dispatched an all women crew. In December 2017, they made history by sending one such team on an intra-Africa trip from Addis Ababa to Lagos.

Double Congratulations to Ethiopian Airlines flyethiopian ! On a all women ♀️operated flight #inspiringgirlsinAfrica and on its 1st flight to #BuenosAires.
Thank you 4 bringing #Africa & #LatinAmerica closer! pic.twitter.com/ALtwtonz77

Before last year’s Addis Ababa – Lagos flight, Ethiopian had in late 2015, dispatched a similar crew that flew passengers from Addis Ababa to the Thai capital, Bangkok.