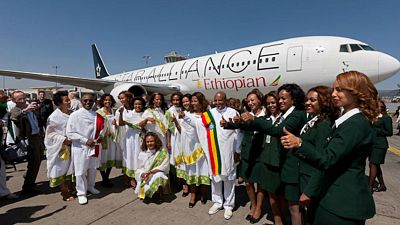 Ethiopian Airlines has made history by sending an all-female crew on a flight from Addis Ababa to Bangkok, Thailand.

The flight was the first in the 70-year history of the airline in which the whole crew was female. And that was not just the pilots: It included maintenance crew members and air traffic controllers.

Captain Amsale Gualu and co-pilot, Selam Tesfaye were charged with flying the crew and passengers to Bangkok, Thailand.

Ethiopia Airlines is currently ranked the largest in Africa by revenue and profit.

The carrier has targeted the growing trade ties between Asia and Africa in recent years, as well as Brazil in South America.