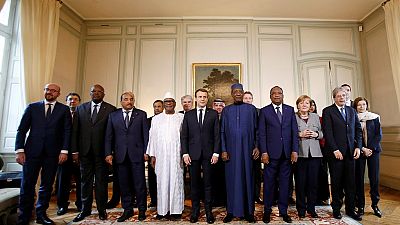 <p>*Saudi Arabia has pledged $100 million towards the five-nation anti-terror force in the Sahel region of West Africa. The pledge was confirmed by French president Emmanuel Macron who also announced that the United Arab Emirates has offered $30 million. *</p> <p>“We must win the war against terrorism in the Sahel-Sahara region,” Macron told a press conference after the meeting.</p> <p>Macron made the announcement at a meeting where he hosted Germany’s Angela Merkel along with the five African presidents of the force’s contributing countries, Burkina Faso, Chad, Mali, Mauritania and Niger.</p> <p>The G5 Sahel Force is an initiative pooling together troops from the five countries to fight Jihadists in the North African part of the African continent.</p> <p>While France is currently leading counter-terrorism operations in the region, with its 4,000-strong Barkhane force stationed in Mali, Chad, Ivory Coast and Burkina Faso, reports indicate that Macron seeks to share the burden with European and Arab partners, with a grand goal of handing over responsibility of Sahel’s security to African forces.</p> <p>The ambitious goal is to have 5,000 troops operational by mid-2018, wrestling back border areas from jihadists — including a local Al-Qaeda affiliate — who often enjoy tacit local support in the near-absence of state structures.</p> <p>Priority number one is to re-establish law and order in the stretch of desert where the borders of Burkina Faso, Mali and Niger converge.</p> <p>“There are attacks everyday, there are states which are currently in jeopardy… We must intensify our efforts,” Macron said.</p> <p>Militants have mounted repeated attacks in recent months, including an assault in Niger on October 4 which killed four US soldiers, another two weeks later in which 21 Niger troops died and an attack at restaurant in Burkina Faso in August, in which 19 people were killed.</p> <p>The G5 force is set to work alongside Barkhane troops and the UN’s 12,000-strong <span class="caps">MINUSMA</span> peacekeeping operation in Mali — the most dangerous in the world, having lost 90 lives since 2013.</p> <p>The International Crisis Group described the G5 force as being part of European efforts to “bring down the expense of their overseas operations by delegating them partially to their African partners”.</p> <p>“The Sahel is politically and economically strategic, especially for France and Germany, both of which view the region as posing a potential threat to their own security and as a source of migration and terrorism,” it added in a report.</p> <p>The European Union has so far pledged 50 million euros for the force and France another eight million, while each of the African countries is putting forward 10 million euros.</p> <p>The United States has also promised each of the Sahel countries bilateral aid of $60 million.</p> <p>The arid Sahel region has become a magnet for Islamic militants since Libya descended into chaos in 2011.</p> <p>In 2012, Qaeda-affiliated jihadists overran the north of neighbouring Mali, including the fabled desert city of Timbuktu.</p> <p>France intervened in 2013 to drive the jihadists back but swathes of central and northern Mali remain wracked by violence, which has spilled over into the region</p>