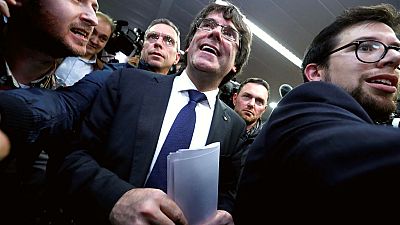 Several members of Catalonia’s parliament will appear before the Supreme Court in Madrid today to answer for their part in the handling of the region’s independence bid.

Together with 14 members of the region’s sacked government who have been summoned to Spain’s National Court, they have been ordered to testify on charges of rebellion, sedition and misuse of public funds.

Ousted Catalan leader Carles Puigdemont who has fled to Belgium has refused to return to Madrid.

His lawyer Paul Bekaert in Brussels who has denied that his client is seeking asylum says he fears detention if he sets foot back in Spain.

“He won’t go to Madrid. I have proposed that he should be questioned here in Belgium. It is possible, I don’t know if we will do it but this is possible. I have arranged this in in the past with other similar cases.”

Puigdemont and other associates of the dismissed Catalan administration who are in Belgium claim the summonses are politically motivated and have no legal basis.

David Gardner: Spain’s Catalan crisis is a political problem that threatens the Spain’s future, not a legal question https://t.co/xIMnPrlXEp