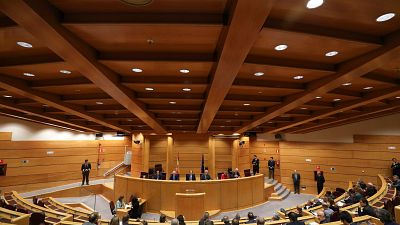 The Spanish Senate is poised to activate Article 155 of the country’s constitution on Friday – giving Madrid the power to take over Catalonia’s institutions and police and remove its regional leader from office.

Battling a sore throat in a parliamentary session on Thursday, Deputy Prime Minister Soraya Sáenz de Santamaría said that Article 155 was not “as some people have said, the start of new political centralisation, but rather the beginning of the end of disobedience of the law and the general interest and the use of the autonomous government against its own region.”

The fear, however, is that implementing the measures could spark confrontation on the streets of Catalonia with some independence supporters determined to stand firm.

Catalonia's president might have just paved the way for Spain to begin imposing direct rule over the region https://t.co/n9VShFcUtC

Our correspondent in Madrid, Carlos Marlasca, said that the deputy PM had explained the poor state of her voice because of ‘an endless summer and an autumn that hasn’t yet started’.

He said the communication problems could metaphorically reflect the situation between Catalonia and Spain and that Soraya Sáenz de Santamaría ultimately had to leave the upper house because of the physical discomfort she was in.

The political crisis, the gravest since Spain’s return to democracy four decades ago, has divided Catalonia itself and caused deep resentment in other parts of the country.

It has also prompted a flight of business from the wealthy region and worried other European leaders who see it as fanning separatist sentiment elsewhere on the continent.

Latest #Editorial from @el_pais @elpais_opinion on the situation in Catalonia https://t.co/zLmaQX6AIi