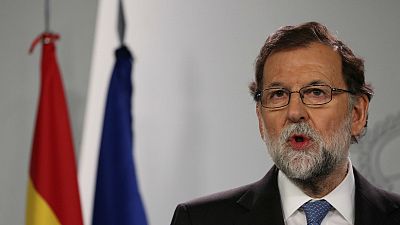 The Spanish prime minister has sacked the government of Catalonia. The move comes just hours after the Catalan government approved a resolution declaring the region independent from Spain.

Mariano Rajoy also announced in a televised address the dissolution of the Catalan parliament and called for snap elections on December 21 in a bid to draw a line under Spain’s worst political crisis in four decades.

As well as removing Carles Puigdemont as head of the autonomous region, he also fired its police chief and said central government ministries would take over the Catalan administration.

“Spain is living through a sad day,” Rajoy said. “We believe it is urgent to listen to Catalan citizens, to all of them, so that they can decide their future and nobody can act outside the law on their behalf.”

As he spoke, thousands of independence supporters packed the Sant Jaume Square in front of the Catalan regional headquarters in Barcelona, their earlier joyful mood somewhat dampened by Rajoy’s actions.

In a stunning show of defiance of Madrid, the Catalan parliament had voted in the afternoon to make a unilateral declaration of independence.

Despite the emotions and celebrations inside and outside the building, it was a futile gesture as shortly afterwards the Spanish Senate in Madrid approved the imposition of direct rule.

Several European countries, including France and Germany, and the United States also rejected the independence declaration and said they supported Rajoy’s efforts to preserve Spain’s unity. 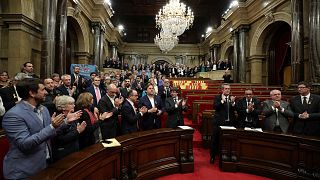