What are the origins of Saint Valentine's Day? 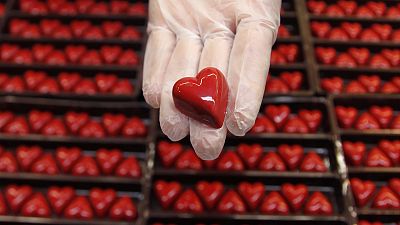 Who was Saint Valentine?

Not much is known about the man who gives his name to this most loving of days.

Although officially recognised by the Roman Catholic Church, and widely agreed to have been a real person who lived in the third century AD, all that is known for certain about Saint Valentine is his name, and that he was martyred and buried on February 14 on the outskirts of Rome.

Some say his death was at the hands of Emperor Claudius II, who is alleged to have beheaded Saint Valentine for performing marriage ceremonies for Christian couples.

Others believe he was the Bishop of Terni and was imprisoned, tortured and martyred on the orders of Claudius II in 273 AD for marrying couples so that the husbands wouldn’t have to go to war.

Another story goes that Valentine refused to pray to pagan gods and was imprisoned. He was sentenced to death, but through his prayers healther the jailer’s daughter who had been suffering from blindness.

As he was led away to be executed, he handed her a note signed “Your Valentine”.

Whatever the case, the true identity of the saint has been shrouded in mystery since before his canonization.

Pope Gelasius I was one of the first to question the legitimacy of Saint Valentine’s martyrdom, referring to the man and his acts as “being known only to God”.

It has also been suggested that Valentine was not just one man, but a number of men of the same name, conflated into one.

So little is reliably known about him, however, that, in 1969, the Catholic Church removed his name from the General Roman Calender.

While the Roman Catholic Church still recognizes him as a saint, and continues to list him as such in the Roman Martyrology, Saint Valentine is now recognised more by young lovers than by priests.

The 14th century English poet Chaucer makes one of the first references to a Saint Valentine’s day as we now recognise it.

In his ‘Parliament of Foules’, Chaucer writes:

“For this was sent on Seynt Valentyne’s day / Whan every foul cometh ther to choose his mate.”

It referred to February 14 – a day believed to be when birds sought their mate.

In the early days of Christianity, it didn’t recognise love as much as it celebrated martyrdom and suffering.

In face, the celebration of “love” is most likely to have originated in Medieval times, romance later still.

The earliest description of the date as an annual celebration of love appears in the Charter of the Court of Love – a document allegedly issued by Charles VI of France describing lavish festivities including feasts, poetry recitals, and jousting.

Amid these festivities, the attending ladies would hear and rule on disputes from lovers.

Jump forward to 1797, and you’ll find that the Valentine had become ingrained in romantic culture.

That year, a British publisher issued ‘The Young Man’s Valentine Writer’ – a book containing scores of suggested sentimental verses for a young lover unable to translate his feelings into written word.

But Valentine’s day is all about splashing out on the one you love – if you can’t afford to do it everyday, once a year should be within budget.

With all the chocolates, flowers, perfume, jewellery and more, it’s not cheap.

Luckily for those who haven’t found that special someone just yet, there is a Singles Awareness Day.

Born out of a desire to break away from commercialism, it is celebrated on February 15, and suggested activities for this day include sending yourself flowers, planning parties for other singles to mix and meet and to participate in some sort of single’s event.