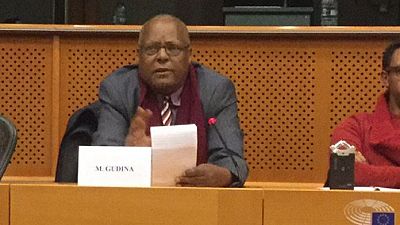 <p>Dr Merera Gudina, leading opposition figure in Ethiopia and Chairman of the Oromo Federalist Congress (<span class="caps">OFC</span>), has been denied bail by a court. </p> <p>Gudina is facing terrorism charges by the government which accuses him of meeting anti-government elements during a European tour last year.</p> <p>The privately run Addis Standard news portal reported that the court granted the prosecutors an additional 28 days to continue their investigations. </p> <p>His lawyers were also unsuccessful in an attempt to apply for release on bail and the termination of potential terrorism-related charges. On his last appearance in court, his lawyers said Gudina vehemently denied any terrorism allegations and said that he had spent his life teaching against the ideals of violence and terrorism.</p> <p>According to the country’s Anti-Terrorism Proclamation of 2009, police investigating terrorism-related offences can obtain from a court four months of each 28 days to remand and further investigate suspects. </p> <p>This is the second month that the prosecutors have secured to conclude their investigations of possible terrorism-related charges against him. The position of the police varies from that of the government which says he was arrested for flouting sections of the current state of emergency.</p> <p>Ethiopian security forces arrested the Gudina shortly after his arrival in the capital Addis Ababa on December 1 from Belgium. Together with other activists and the Olympic athlete Feyisa Lelisa – he met with Members of the European Parliament on 9 November 2016.</p> <p>Ethiopia is currently under a six-month state of emergency imposed to quell spreading anti-government protests in the Oromia and Amhara regions of the country. The protests which started in November last year continued into this year.</p> <p>Since January 2016 the human rights situation in Ethiopia has not improved at all. Human Rights Watch reports that security forces have killed more than 500 people during protests over the course of 2016. </p> <p>The government reported mass arrests of persons believed to be behind the protests, some are to be released whiles others will be arraigned before the courts on offences of destroying private and public property.</p> <p>The Command Post administering the curfew says relative peace has returned to the country. There are issues also surrounding communication access with slow internet in most parts of the country. Some European countries have lifted their travel advice for Ethiopia with the ‘return to peace.’</p> <p>The European Parliament adopted an urgency resolution on the violent crackdown on protesters in January 2016, which requested that the Ethiopian authorities stop using anti-terrorism legislation to repress political opponents, dissidents, human rights defenders, other civil society actors and independent journalists.</p> <p><strong><span style="color:green;"><span class="caps">SUGGESTED</span> <span class="caps">READING</span></span></strong> <a href="http://www.africanews.com/2016/11/17/ethiopia-a-year-after-protests-started-timeline-of-events-1/" target="_blank">Ethiopia: A year after protests started – Timeline of events [1]</a></p>