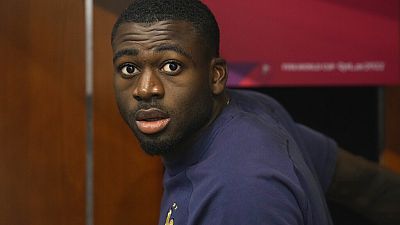 Youssouf Fofana has gone from serving pizzas to delivering crosses in the World Cup.

Dropped in 2015 at age 14 from Clairefontaine, France's national training centre, his future in soccer seemed at an end. So he went to work for a pizzeria.

"That was the best way to earn money and also to follow my dreams," the 23-year-old midfielder said Thursday, two days before France meets England in a World Cup quarterfinal.

Fofana made his French national team debut in September and was picked by coach Didier Deschamps for the 26-man team that is defending Les Bleus' World Cup title.

He entered as a second-half sub in the group stage wins over Australia and Denmark, started in the 1-0 loss to Tunisia, and played the last 25 minutes of the round of 16 victories over Poland.

Quite the turnaround for a player who needed two years to find a professional club. He played for Drancy, an amateur side in Paris' northeast suburbs before signing with Strasbourg's youth academy in 2017.

"I had my doubts, and you have to know how to move forward," he said through an interpreter.

France, seeking its third World Cup title, would advance to a semifinal against Portugal or Morocco. The other side of the bracket will have the Argentina-Netherlands winner play Brazil or Croatia.

Les Blues are led by Kylian Mbappé, who leads the World Cup with five goals. England right-back Kyle Walker has faced Mbappé and Paris Saint-Germain while playing for Manchester City in the Champions League and said Wednesday "we take respect that he is a good player in good form at the minute, but I am not going to roll out a red carpet for him and tell him to go and score."

Fofana seemed amused by that.

"Hats off to him." Fofana said. "If he can stop Kylian, good for him. But there are 19 other teams in the French league that are waiting for the answer of how to stop Kylian, and the truth is on the pitch."

Fofana was in a jovial mood when discussing preparations. Asked about the frame of mind in the dressing room before World Cup kickoffs, he responded: "The atmosphere is tense, tense, tense."

"No, I'm joking," he went on. "We can wear headphones, so if we don't like the chosen music for the group, then we can listen to our own music."

"He's given me some advice and I should continue doing what I'm doing," Upamecano said through an interpreter. "It's a real pleasure to be able to talk to someone like that. He was a winner. He was a warrior, a real example for the French."