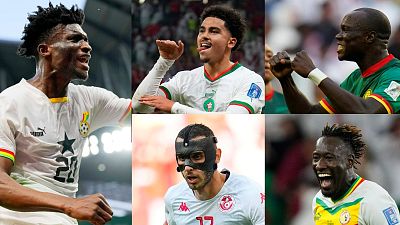 The second fixtures of the group phase of 2022 Qatar World Cup ended Monday (Nov. 29) with two exciting performances by Cameroon and Ghana. Overall, the 5 African nations represented were able to raise up their game.

Africa's representatives at the 22nd FIFA World Cup can still qualify for the round of 16. With some provided with bigger ad other slimmer chances.

France, Portugal and Brazil are the first nations which have already booked their ticket for the next stage.

Bets are open ahead of the fixture Senegal-Ecuador. The Netherlands only need a point to advance in the tournament. On Tuesday (Nov. 29), they'll play already eliminated hosts Qatar.

The African champions must win to qualify and will want to build on their strong offensive performance against the Qataris (3-1). A draw would qualify the Central American team, which is worried about its captain Enner Valencia, co-top scorer of the tournament (3 goals) who suffered a knee injury.

Tunisia will play reigning champions France on Wednesday (Nov. 30). 'Les Bleus' became the first team to qualify for the next round when beating Denmark (2-1) on November 26 and are expected to rotate their squad for their last group game.

The Carthage Eagles can keep their dream to reach a knockout stage spot in 6th World Cup appearance if they beat the French substitute team. In addition to that, Australia vs Denmark should end in a draw.

For the Danes to qualify they must beat the Australians and hope for a draw or a France's victory in the other fixture of the group.

Morocco is in a rather comfortable position ahead of its match against already eliminated Canada on Thursday, December 1st.

Croatia, the finalist of the 2018 World Cup, need to secure a draw to move forward.  Belgium will play its qualification on Thursday in a stressful clash against the Croats. A success would send the Red Devils through the round of 16. A defeat would mean elimination. In case of a draw, their fate would be in the hands of Morocco.

Cameroon secured a draw against Serbia in dramatic fashion on Monday (Nov. 28). The Indomitable Lions will remember an eventful and historic day as they scored a first point in the World Cup in 20-years.

They are however in a complicated position ahead of their game against Brazil on Friday (Dec. 2).

The Seleçao qualified after beating Switzerland with a goal by Casemiro to reach the knockout stage on November 28.

Switzerland will have to dominate Serbia to secure a spot in the next round.

Ghana vs Uruguay already has a taste of legend. The fixture is a repeat of the 2010 quarter finals as well as a must-win for the Black Stars.

The game provides an opportunity to even the score in the rivalry and is a decisive match to advance in the Qatar World Cup.

Cristiano Ronaldo's Portugal qualified after beating Uruguay on Monday (Nov. 28). The Portuguese will face South Korea on Friday (Dec. 2). The situation is critical for South Korea and Uruguay, but both teams can still qualify.