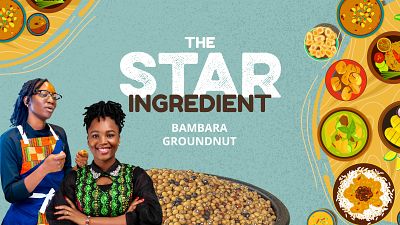 Bambara Groundnut, the star ingredient of the second episode of our podcast, is a leguminous plant cultivated widely by subsistence farmers across sub-Saharan Africa and is something of a superstar amongst relegated crops. Known as a ‘complete food’, it’s versatile, hardy in marginal soils and highly resistant to adverse climate conditions.

In Nigeria, particularly in the East of the country, you might find it freshly roasted and spilling from the baskets of the women who typically sell it at the market, or more commonly tucked into palm leaves as a thick and sumptuous, yellowish pudding known as Okpa.

Perhaps less frequently, you’ll find it where we do, in the second episode of our culinary podcast - in the form of a luxurious, puréed spread on the bread course of a fine-dining menu, lovingly presided over by young Nigerian culinary star-on-the-rise, Moyo Odunfa.

The 23-year-old chef trained at the prestigious Culinary Arts Academy of Switzerland before returning to her native Lagos and is one of two guests who will explore this ingredient with us and show us how to cook with it.

Our second guest is Nkechi Idinmachi, a Nigerian entrepreneur who leveraged the potential of this underutilised superfood into a food company selling all things Bambara. Her adventures with the bean began when she came upon it as a solution to feeding her first child who was born with a host of allergies to foods like eggs, peanuts, milk, gluten and soybeans.

Bambara Groundnut, or Vigna subterranea, to use its scientific name, is what’s considered a relegated crop often bearing the sobriquets of ‘poor man’s crop’ or ‘woman’s crop’ meaning one that is predominantly grown for household subsistence rather than export.

And while Nigeria remains the largest producer of the crop in Africa, cultivating roughly 100,000 metric tonnes per annum, this figure pales in comparison to that of cash crops like maize (12 million mt), cassava (60 million mt ) and yams (50 million mt).

And yet, its high potential for bolstering food security on the continent has not entirely escaped the attention of crop scientists and agronomists.

In 2019, the plant was selected as one of the 50 foods of the future by the World Wildlife Foundation (WWF). Take a quick glance at its nutritional profile and climate-resilient credentials and it’s easy to see why.

As Dr Emmanuel Bassey Effa, an agronomist at the University of Calabar in Nigeria, explains, Bambara Groundnut is known as a ‘complete food’, containing 64.4% carbohydrates, 23.6% protein, 5.5% fibre and 6.5% fats with additional vitamins, minerals and amino acids in the mix.

A bowl of Bambara, in other words, will give you all the nutrients you need to set you up for the day.

Beyond that, Bambara Groundnut has won admiration for its capacity to grow in marginal conditions and fix nutrients into the soil, boosting the yields of other plants it is intercropped with.

“[It] has the capacity to fix nitrogen into the soil, which is very, very needful in our area where there is so much soil degradation and loss of nutrients…it doesn't require so many nutrients in itself to grow, it can be grown on marginal soils, very poor soils and it will produce a yield no matter what,” he adds.

So, a nutrient powerhouse, easy to grow, good for the soil… Why then the paradox of relegation for such a seemingly virtuoso legume?

Well, there are a number of issues at play.

Firstly, raw, unprocessed Bambara takes a really, really long time to cook. It typically needs a few hours on the boil to be ready to eat - no small consideration for energy-strapped communities.

Secondly, dehulling and preparing the hard-shelled Bambara is much more labour-intensive than other crops like cowpea and peanuts, and it’s often done manually.

Dr. Effa, however, believes that these problems are not insurmountable. He thinks that if bambara is ever to escape its relegated status, it will require attention, research and investment by agricultural bodies to industrialise these processes.

And for their part, our two guests, Chef Moyo and Nkechi, are determined to put this overlooked bean on top of the menu - at home in Nigeria and around the world.

“It's written in our inferiority complex on colonisation that tells us that anything that we are is not enough. But we are more than enough”.

As for Nkechi, she says Bambara remains very dear to her heart after her entrepreneurial adventures with the food.

“I call it our hero crop. And it saved my son,” she says.

Boil the bambara groundnuts for a few hours until they are very soft. You can also soak them in advance to reduce cooking time.

Heat oil in a pan over a medium heat.

Add onions, and tomatoes to the pan and cook until softened

Add Bambara nuts into the pan.

Add seasoning and fry until the seasoning is well integrated.

Mash the Bambara nuts in a mortar and pestle or use a blender.

Combine the flour, sugar, salt and yeast with the water.

Knead the mixture for 5-10 minutes.

Leave it to rise for 30 minutes.

Roll into your desired shape and fry on both sides in a hot pan with or without oil until browned and cooked through.

If you’re hungry for more recipes and stories around indigenous African ingredients, listen to the first episode of our series where we spoke to Pierre Thiam about the cherished food of his childhood, fonio.

The podcast The Star Ingredient was funded by the European Journalism Centre, through the Solutions Journalism Accelerator. This fund is supported by the Bill & Melinda Gates Foundation.