Feared by many, the Gule Wamkulu dancers of Zimbabwe are often described as a secretive and ritualistic society.

The negative image goes hand in hand with a reputation for violence, something that the organiser of the first Gule Wamkulu festival in Harare wants to change.

"We are celebrating our ancestors who brought the culture from Malawi but have since passed on. Look at my age, I am young. What pains me is that people see our culture as belonging to people who can't think and are not educated", said festival organiser, Notice Mazura.

The society's reputation has been tarnished in Zimbabwe due to the proliferation of copycat groups that commit crimes such as extortion, theft, sexual abuse and assault.

"These people are evil. They move around with weapons and are violent criminals. If they meet someone they don't like, they sometimes attack them", denounced Mufakose township resident, George Desha.

The leader of the Gule Wamkulu organization claims it is necessary to distinguish between the genuine practitioners and copycat dancers.

"The appearance of Gule Wamukulu and sometimes the behaviour of the Nyau dancers are the ones that make people assume and think that they may be violent, or they've got other things attached to it. Some even attach Gule Wamukulu with witchcraft, which is not it, that's not it. But, of course, people from Gule Wamukulu Nyau dance know a lot of medicines (traditional medicines, Ed.) just like the others", said Kennedy Kachuruka, leader of the Gule Wamkulu Organization.

The origins of this dance can be traced back to the 17th century and the Chewa people spanning the countries of Malawi, Mozambique and Zambia in southern Africa. 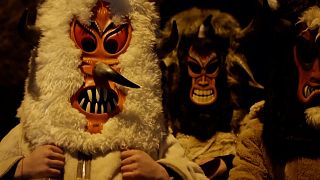