Fighting in eastern DRC continued on Monday between government forces and the M23 rebels near the strategic city of Goma in North Kivu province.

"The message that we have today is that all groups who currently bear arms should lay those arms down and choose the path of peace through dialogue because there is nothing that can be gained through the barrel of a gun", said Uhuru Kenyatta, former President of Kenya and East African Community's facilitator on the Peace Process in the Eastern region of the Democratic Republic of Congo.

The Congolese government accuses Rwanda of supporting the rebels, an accusation rejected by Kigali.

"Silence the guns and join in a political process. That is to the local groups. To foreign base groups, it is basically saying that the DRC is no longer the battleground for problems that are not from this country", added the former President.

Eastern DRC was the theatre of two bloody regional wars in the 1990s leaving scores of armed groups that remain active in the region. 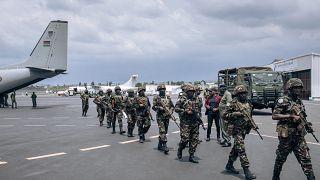